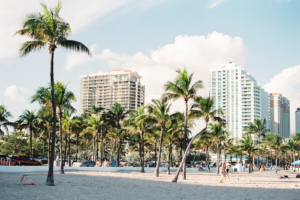 2 min read July 2022— Miami and the wider South Florida region have become relocation and expansion hotspots, with  booming real estate and redevelopment common themes of headlines over the last two years. It all begs the question: Is Miami at risk of becoming a victim of its own success?

Over the course of the last month alone, another tranche of headquarters and office expansions and relocations were announced. PricewaterhouseCooper, one of the Big 4 accounting and professional services firms, recently signed a new lease for a 38,409-square-foot office space at 545wyn, a new Wynwood office. Fundkite, an originally New York-based fintech company, announced it would be relocating its headquarters to Miami and reducing its New York footprint to a branch office. Most famously, hedge fund and trading firm Citadel Securities, owned by Ken Griffin, announced it would be relocating its 1,000-person headquarters to Miami and intends to help build a new office tower in Miami’s Brickell neighborhood.

The most recent moves only add to an already long list of firms that have set up shop in Miami, each with billions in asset-under-management (AUM), including Starwood Capital Group ($120 billion AUM), Blackstone ($915 billion AUM) and Apollo Global Management ($497.6 billionopens PDF file AUM).

While it may be difficult today to deny Miami’s financial fortitude, the question remains as to how Miami will change for the long-term. Long-standing and common complaints from residents about the city and Miami-Dade County overall have only been exacerbated by recent changes. Increasingly expensive rents have made Miami one of the most expensive cities in the country, driven by the magnitude of out-of-state residents with deep pockets. The rising costs have pushed long-time locals further away to the city’s periphery and encroached on working-class neighborhoods.

When discussing the need for affordable housing with Invest: last year, Miami-Dade County Mayor Daniella Levine-Cava pointed to allocated funds. “Affordable housing has been a chronic problem in South Florida and it’s a more pressing problem today than it has ever been. Housing prices are being driven upward with South Florida becoming an increasingly popular destination for companies and individuals.We are aggressively constructing affordable and workforce housing. We have $260 million set aside specifically for affordable housing and we’ll have more than 10,000 units built by the end of 2022.”

Since then, Miami-Dade County has declared an affordability crisis, even as the county continues to develop affordable housing programs that push for increased density and greater development, in an effort to increase supply in an inventory-scare market.

Predictably, traffic congestion remains a critical issue with little in the way of relief in sight. Public transportation overall remains woefully inadequate, and while the county-wide SMART plan promises relief, the county has only recently purchased the first fleet of electric buses for the South-Dade Transitway. The northward Metrorail expansion toward the Broward County line remains years away after the Florida Department of Transportation suspended its Project Development & Environment Study (PD&E) until the Florida Transportation Authority’s request for proposals (RFP) establishes the transit technology and alignment, explained Nilia Cartaya, FDOT’s Modal Development Office administrator for District Six, to Miami Today in March.

Nevertheless, Miami Dade Department of Transportation & Public Works Director Eulois Cleckley, understood county resident’s desire for multimodal transit, saying in his interview for Invest: Miami 2022, “We’re utilizing the SMART plan to find the highest and best use of land for transit corridors to provide ease of access, encourage alternative transportation and ease traffic congestion. You can’t continue to build highways and expect lower congestion. We need to provide the infrastructure that gives people options for how to get around.”

While the city and wider county have benefited from the in-migration and business relocations that seem set to establish Miami as one of the new financial capitals of the world, appearances can be deceiving. While wealthy emigres from across the United States have flocked to the Sunshine State over the course of the pandemic, the case can be argued that it has come at the expense of locals. U.S. Census data shows that Miami-Dade County, despite the strong business growth and its new wealthy residents, saw its population decrease by just under 39,000 people, or about 1%.

While the problems facing Miami residents include transportation and high costs, they are not limited to those areas alone, with healthcare and access to education cited as additional challenges to overcome, writes McKinsey Senior Partner Andre Dua for the South Florida Business Journal, citing McKinsey’s American Opportunity Survey. While the region has seen growth in the tech, financial and professional services jobs, the largest industry growth has remained concentrated in transportation and utilities, as well as hospitality and leisure sectors – industries whose initial salaries make living in the region difficult considering the high cost of living.

Miami is at a crossroads. It would not be the first time the city and Miami-Dade County have seen a boom-and-bust, but whether this time will be different remains to be seen. Most notably, City of Miami Mayor Francis Suarez has worked to bring new businesses to the city proper, often boosting relocation announcements on twitter and highlighting charitable contributions to the community.  Yet, while there are benefits to new capital and the nonstop real estate development, will the problems – particularly high costs and public transit – that have long held back the entire county finally be addressed?