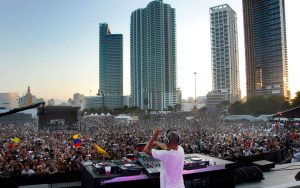 When the novel Coronavirus (Covid-19) outbreak began spreading in China at the end of January, there was very little overseas impact and China seemed to bear the brunt of the outbreak, shutting down logistics and imposing quarantines. But as cases began popping up globally, with Italy, Iran and Southeast Asian countries particularly affected, governments started to take action. The tourism industry, as a result, is suffering. The United States currently has 140 active cases of the virus, with 11 deaths, and officials confirmed two cases in Florida on Sunday.

Florida very much intends to maintain open borders and air travel. Two of its economic strengths are international trade, with 40% of all U.S. exports to Latin America passing through Florida, and tourism, which added an estimated $111.7 billion to the state’s economy in 2016.

Already, Miami is feeling the impact of the outbreak. This week, the city was meant to host Zendesk Relate, a 2,300-attendee conference at Miami’s conference center held by San Francisco-based customer-service software company Zendesk. But the company announced the event’s cancellation on Monday, on the same day American Airlines suspended its Miami-Milan service as the number of active cases in Italy ballooned to 2,706, with 107 deaths registered.

Another event impacted by the virus is the annual Ultra Music Festival, which organizers have reportedly postponed – potentially for a year, according to the Miami Herald. The electronic dance event typically attracts 55,000 people per day and the 2020 edition is due to be held on Bayfront Park. With tickets starting at around $300 and going up to $1,500, the impact of cancellation would be significant. “I agreed with the decision to postpone it,” City Commissioner Manolo Reyes told the Miami Herald. “And now I’m worried about the Calle Ocho Festival,” referring to the Latin music festival scheduled for March 15 in Little Havana.

Some conference organizers and attendees are attempting to postpone events until May, when there is hope the virus will be contained. But Florida Gov. Ron DeSantis is less optimistic about the impact on Florida, predicting more cases will emerge shortly.

The Medical Affairs Professional Society is scheduled to host a conference on March 9-11 but has already experienced some cancellations, according to CEO Travis Hege. The conference is still going ahead as scheduled, he told the Miami Herald. “Any deaths in Florida or outbreak in Florida is the biggest thing we are monitoring,” he said. “We’re continuing to monitor the latest developments. Otherwise, we will be proceeding as planned.”

And while cancellations of events like Zendesk Relate are not ideal, this is far from the biggest event Miami is due to hold this year. Art Basel may or may not take place in June after the Hong Kong edition was canceled and Miami Pride events will take place at the end of March and beginning of April.

But Miami-Dade Mayor Carlos Gimenez said Tuesday there is no need to cancel major events, and instead there needs to be a specific focus on protecting the elderly and vulnerable populations. “We will step up and make sure that those elderly get those services,” he told Local 10. He added that arriving visitors will be more thoroughly screened and that residents should “live your normal life (and) take just common-sense precautions.”