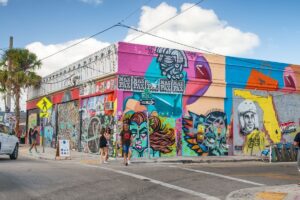 2 min read August 2021 — Miami’s office segment continues to show signs of momentum, with Schonfeld Strategic Advisors announcing the selection of the city’s Wynwood Arts District as the location for its HQ2. Schonfeld is the latest firm to open an office in the city as businesses continue to favor the Magic City for expansions or relocations.

The lease agreement marks the New York City-based hedge fund’s first major expansion to Miami. Schonfeld’s new home will be The Dorsey, a 12-story mixed-use project whose development was spearheaded by the Related Group, Tricera Capital and LNDMRK Development. Schonfeld is currently housed at Cube Wynwd, leasing temporary office space as it awaits the completion of The Dorsey. The fund has existing offices in cities such as Chicago, Hong Kong, London, Tokyo and Singapore.

Over the past week, a flurry of organizations have said they would open or expand their presence in Miami. New York-based Apollo Global Management, Moore Capital Management, Houston-based ManhattanLife Insurance Co, and Uber have all looked to grow their Miami footprint, and are leasing temporary office space as permanent offices are established, or in Uber’s case, moving in to its new 13,000-square-foot office space at 3 Miami Central, the new class-A office tower located in the mixed-use development that houses the area’s Brightline passenger rail station.

For Apollo, Moore Capital and ManhattanLife Insurance, temporary office leases will suffice as they scout potential locations and developments for their permanent presence. Those offices are on the way, as Miami office demand remains robust. “We’re seeing record trades for office. Everyone felt that office was going to die because no one was going back to work in those buildings. But that hasn’t proven out, especially with the new occupiers, many of whom are looking for very large spaces,” locally-based real estate firm Principal Arden Karson of Karson & Co told Invest:.

Apollo is licensing 3,500 square feet of temporary office space in the Wells Fargo Center at 333 S.E. Second Ave. in the city’s Downtown — the office of Miami-based law firm Greenberg Traurig, P.A. — with the option to extend its stay up to one year.

“For a firm like Apollo, which is new to Miami, our space is an absolutely perfect place to base themselves as they begin to learn more about our city and our community, especially with our lawyers being available to share their in-depth knowledge of South Florida’s economy and growing industry sectors,” Jaret Davis, co-managing shareholder of Greenberg Traurig, said in a statement.

For Moore Capital and ManhattanLife, both have signed leases with Cushman & Wakefield at 701 SW Brickell with 4,0000 and 3,000-square-foot spaces leased out, respectively. The 33-story tower is home to other well-known tenants, including Bank of America, Holland & Knight, UBS and the Greater Miami Convention & Visitors Bureau.

As for Schonfeld, Miami Mayor Francis Suarez tweeted what he saw as the motivation for the move.

“Schonfeld made it clear that acquiring & retaining talent was central to their growth strategy. That’s exactly why they decided to build their HQ2 in Miami. Let’s keep silencing the doubters.”