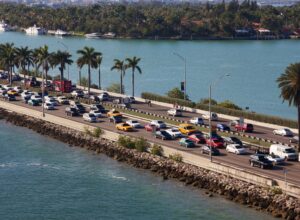 2 min read January 2023 — South Florida residents are pretty much in agreement that there is  a traffic and transit problem. A new report from INRIX, a leading transportation analytics company, rubs a bit of salt in that wound by placing it fifth among metro areas for traffic in the country, and ninth internationally.

Congestion is also costly for drivers. According to INRIX, traffic costs Miami drivers an average of $1,733 per year. That is actually higher than #1 ranked London, where although they face higher congestion, it only costs commuters $1,377 per year. However, both cities look favorable to drivers in No. 2 ranked Chicago, where congestion costs commuters $2,618 per year.

“We have a major improvement underway the Smart plan, the South-Dade Transit Way is half done, we expect within the year people will be able to ride in comfort on express busses, from Florida City to Dadeland and then to metro rail,” said Miami-Dade Mayor Daniella Levin Cava in a CBS News report.

The county continues to look at even more ways to improve transit options for residents. The northeast corridor just got a new rail station in Aventura and the Metro Mover is planned to extend to Miami Beach, according to Cava.

“We also want to figure out ways to be a more efficient transportation system,” Eulois Cleckley, director and CEO of Miami-Dade Department of Transportation and Public Works told Invest:. “Our Better Bus Network is a bus optimization project. We are slowly but surely implementing better efficiencies for our Metro Bus service. This allows us to build a better quality of life for people in the county because we can relieve the burden of transportation costs.”

Traffic-escaping, cleaner, bigger electric buses have also been a part of the plan, and 100, 60-foot buses were approved last week in a consent-agenda bulk vote, according to Local 10 News. After being briefed on the details, the commissioners agreed to allocate over $175 million for the 100 buses, 50 charges, parts, training and other items.

As part of the South Corridor Rapid Transit Project, the electric buses are set to run on the South Dade Transitway. The county will see the pilot bus in October of this year. Then beginning in June 2024 through February 2025, 60 of what is being termed left-handed buses will make their way into service.

The county has also acknowledged the need to make improvements to Transportation America, which provides rides to 38,479 people with disabilities in Miami-Dade County, according to the Miami Herald. The company is under a $260 million contract for five years to offer the service, which many are now calling unreliable.Late drivers, no-shows and drop-offs at wrong locations were cited as the cause of the majority of complaints.

Transportation officials for Miami-Dade County have answered the backlash by making improvements in the service, the Miami Herald reported. These proposed changes include deploying standby vans when regular vehicles are behind schedule, a dispatcher to monitor routes and extended call center hours. The updates are scheduled to take effect when the next contract term with Transportation America begins in March.

“This is an environment with multiple stakeholders, municipalities, counties, state and federal entities so it can be tricky to find total consensus all the time,” Aileen Bouclé, executive director of the  Miami-Dade Transportation Planning Organization, told Invest:. “But if everyone is committed to solving the problem, even if there are different ideas for the solutions, we still agree on the need to expand mobility in Miami-Dade in all its forms.”