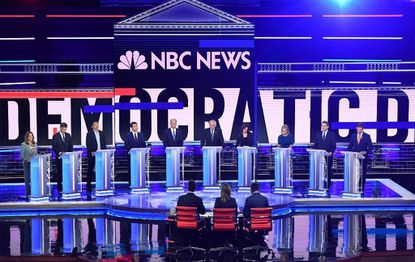 2 min read July 2019 — Miami grabbed the national spotlight last week when it hosted the first Democratic presidential debates. The city is already a popular destination for tourism and business, but events like these boost its political profile and create a trickle-down effect that has a broad and positive impact.

“Miami is a vibrant and dynamic city that reflects the values and diversity of the Democratic Party. I couldn’t imagine a better setting for our first debate,” said Democratic National Committee Chairman Tom Perez in a written statement regarding the event at the Adrienne Arsht Center for the Performing Arts.

These political events also benefit the educational institutions that host them. Usually, universities spend millions of dollars to host presidential debates. This has a direct impact on the local economy, with the involvement of subcontractors and others in the preparations for security and media.

According to an article in USA Today, Lynn University, which hosted a 2012 general election presidential debate in Boca Raton, estimated the event generated a staggering $63.7 million in “earned media.” For example, the university estimated that some 4,000 media representatives attended the debate and spent $2.6 million while in town.

These events can also represent an enriched educational experience for students because a number of seats are usually distributed to university students and officials. As a debate site, an institution also enjoys heightened visibility and a chance to attract new students.

While less obvious, another significant benefit is the ability of a city to capture the nation’s attention and potentially influence the election through the questions and topics discussed. Miami is a demographically diverse and coastal city, making it perfectly suited to raise issues of national concern, such as immigration and climate change, as happened at the Democratic debates.

Miami’s rich culture, demographics and strong business environment make it a prime destination for political events. With the spotlight in hand, Miami not only bolstered its national stature, it provided an opportunity for the local community to shine, and potentially grow.