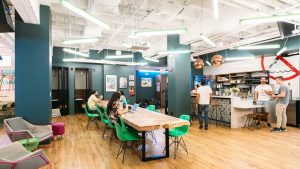 2 min read NOVEMBER 2019 — The traditional office space is changing fast. Hot-desking came first, and now with more pressure to recruit highly skilled personnel, workers are increasingly able to command perks such as home office and telecommuting. According to Fundera, telecommuting has grown by 40% in the last five years and employers offering the benefit save around $44 billion per year in total. The drive to home office also created a new real estate niche – coworking spaces – and that niche is now driving real estate growth in Miami.

“Coworking tenants continued to dominate absorption activity in Miami for the second quarter in a row as they continue to lease significant footprints in buildings throughout the market. Out of the seven largest lease transactions year-to-date, five were coworking tenants, with WeWork leading the number of coworking companies,” said Donna Abood and Michael Fay, Principals and Managing Directors-Miami at Avison Young in an article written for Rebusiness Online.

According to a special report by Yardi Matrix, coworking spaces accounted for one-third of leases over the last 18 months. Miami comes in third in terms of metros with most shared space as a percentage of real estate stock, at 3.5% –behind only Manhattan and Brooklyn. In the last 10 months, Miami has added around 1.1 million square feet of coworking spaces.

But one of the most highly-leveraged companies in the coworking arena is WeWork, a company that underwent a failed IPO attempt in the last year and wiped out around 80% of its value in the process. The company stretched itself too far, playing the Amazon tactic of taking on huge losses to undercut and wipe out the competition, but without having Amazon’s clout.

Alan Patricof, chairman emeritus of venture capital firm Greycroft and an early backer of Apple, does not believe the coworking space is a bad idea, but rather that WeWork simply bit off more than it could chew. “If you want to be a publicly traded company, you should act like a public company,” Patricof said in an interview with TechCrunch in September, adding that the board members “were all seeing the pot at the end of the rainbow.”

But the global value of coworking spaces is estimated at $26 billion, with growth of 6% expected in the United States to 2022 and 13% elsewhere. Despite WeWork’s errors in judgement, the market is there for a $49 billion valued unicorn, and Miami offers huge opportunities to those investing in the right way. According to Pandwe Gibson, founder and president of EcoTech Visions, a coworking space for manufacturing businesses, these spaces need to be constantly offering the next new thing.

“Entrepreneurs in America don’t just need a WeWork. They don’t just need a desk. Entrepreneurs want to make stuff,” she told Moguldom. The Miami-based startup has 52,000 square feet of space and approximately $3.2 million in public and private investment to scale the business, while it carries out its first raise.

It doesn’t stop with manufacturing space. ShareMD recently spent $33.15 million to purchase a building in South Miami and one in Coral Gables in which to set up co-working spaces for doctors. “Because of the demographics in Florida, we are aggressively trying to expand in the metropolitan areas,” said Easton & Associates Vice President Elliot LaBreche, representing ShareMD in the deal in an interview with The Real Deal.

The attraction of this concept is accessibility to a doctor without the pressure to sign new clients, LaBreche added. “If you have a doctor, and their primary practice is in Fort Lauderdale, but they have some patients in Miami and West Palm, but not enough patients to support their practice, they can join the ShareMD network and use our offices as satellite offices.”