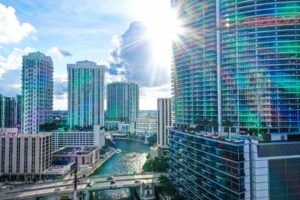 2 min read March 19, 2021 — It’s not just spring-breakers coming to Miami anymore. Florida Funders, the states’ most active venture capital (VC) firm, is actively looking to settle into the Magic City and is looking for office space. That’s part of a greater trend of corporate and startup relocations and office expansions.

The firm announced late Wednesday that it had already made a new hire to lead the Miami office. Maria Derchi Russo, a veteran of the South Florida startup scene, who serves as executive director of Refresh Miami, was brought on board as its new director of community. She will be responsible for building relationships with local founders, entrepreneurial support networks, investors and more in her new role.

“Miami startups are starting to be proven with all these incredible ‘exits’ lately coming to fruition,” Derchi Russo said in a Miami Herald report. “It’s proof strong businesses can be built here — and I’m excited to help get them the funding they deserve.” She will be joined by Director of Investor Relations Christian Leon.

While the firm is looking to invest in local tech startups, the companies’ desire to open is part of a larger trend that shows dozens of VC firms, banks, established corporations, startups, founders and investors continue to relocate to Miami.

While it may be soon to declare “Wall Street South,” the city and the greater South Florida region has undoubtedly burned bright even as COVID-19 adversely affected much of the country, attracting numerous relocations or new offices from the likes of established players such as Blackstone, Boston Private, Palm Drive Capital, or even Goldman Sachs, which is quietly seeking volunteers for its South Florida office; to smaller more nimble startups like Pipe Technologies, ShiftPixy and SwagUp.

One such example highlighting the money being moved and the opportunity investors see in Miami is Softbank Group, Inc. and their commitment of $100 million toward Miami-based startups and companies looking to relocate to the South Florida region. The investments come directly from the company’s vehicles, such as its $5 billion Latin America fund, with Miami-based COO Marcelo Claure pledging to provide the capital for people looking to move to the area.

The state’s business friendly climate, lack of state-income tax, and the city’s aggressive courting of businesses have been a boon to those looking to settle in Miami. Global digital-payments processor ACI Worldwide Corp, another relocation, announced it would receive more than $360,000 in state and local incentives to move to Miami-Dade, vowing to spend millions on its new world headquarters and create 180-plus high-paying jobs.

For others, such as Palm Drive Capital, the geography was a factor in the decision. The city is ideally situated between the Northeast and Latin America. For Managing Partners Hendrick Lee and Nick Hsu, there is opportunity to be had. “Miami puts us in the perfect location to really develop the connections we need to further support Latin American startups,” Lee said in a statement. “There are so many untapped opportunities and brilliant ideas that just need the support of funding and cross-border connections,” Hsu said.

While some are looking at connections to Latin America’s startup scene and others are wondering if Wall Street will stay South, for Florida Founders, it’s about staying local. Maria Derchi Russo’s long experience in the local scene will aid with that goal. Managing Partner Tom Wallace explained in a statement released to the South Florida Business Journal, “Miami’s tech ecosystem is growing rapidly and we’re excited for (Derchi Russo) to welcome local entrepreneurs and startups as we continue to grow as the top VC firm in the state and the Southeast,”.