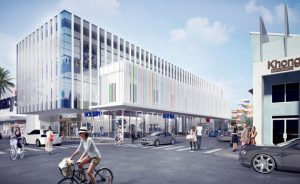 A BID is a legal mechanism that has successfully been put in place in Miracle Mile, Coconut Grove, Lincoln Road and Wynwood, and most recently was established in South Miami. The South Miami BID provides a budget of $200,000 annually to provide services to businesses and commercial properties that include “enhanced safety, marketing, advocacy, promotions, and maintenance,” which are provided by the City Commission in addition to basic services.

Despite a significant hole being created right in the middle of Lincoln Road by the collapse of shopping giant Forever 21, the BID is planning a $67 million makeover, with Miami Beach authorities contributing to the cost of construction. The private business owners in the area will foot the bill for the promotional events by increasing their own taxes.

The idea behind the BID is not directly to attract investment to a given area, but to nurture the area so that investment comes as an added bonus. The Wynwood BID has taken a look at what the public really wants, and one of its priorities was to re-open the beloved shuttered O Cinema. “O Cinema is a cultural icon in South Florida and a home for independent cinema,” said Albert Garcia, chairman of the Wynwood BID to the Miami Herald. “We were just as blindsided by the news of their closing as everyone else. As a long-time property owner in Wynwood as well as a member of the BID, it was important to me to see how we could keep O Cinema here.”

As the age of e-commerce dawns, BIDs are a way for traditional store owners to tune into the desires of the public, who now want more than just a traditional shopfront. Not only is investment being made in the community, but new business models are emerging that evolve with real demand.

“Nespresso has a very successful store on Lincoln Road,” Stern said to RE: Miami Beach. “As a company they’ve decided they don’t need cafés in the stores. They’re expensive and you have to maintain employees.” Instead, Lincoln Road’s Nespresso is downsizing from 4,500 square feet premises to 2,500 square feet, but staying on the same street, allowing it to maximize its value and provide its customers what they really want.