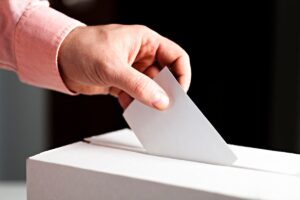 In the gubernatorial race, the pollopens PDF file , released Monday, shows Abbott now has 47% of voter support, while O’Rourke claims 38%. That is up 2 points from last month’s poll, where the Texas governor boasted a 7-point leadopens PDF file .

Released Monday by the Dallas Morning News and the University of Texas at Tyler, the poll surveyed 1,268 registered voters and has a margin of error of plus or minus 2.9 percentage points.

According to political scientists, Abbott’s recent media blast could be the catalyst for his boost among voters. He reportedly spent $4.3 million in advertising in August, capitalizing on kids heading back to school and more people tuning in. He also decided to take a more personal approach, with one of his television ads featuring his wife Cecilia as she discussed their marriage and the accident that landed Abbott in a wheelchair in his 20s.

O’Rourke, however, looks to be saving more of his funding for the weeks heading into the election, spending only $40,000 in August. In lieu of a statewide campaign, O’Rourke also chose to air advertising only in six limited markets throughout Texas. According to AdImpact, although O’Rourke is allocating more money than Abbott for ads between now and Nov. 8, Abbott still has the edge in total predicted spending, with $16.6 million to O’Rourke’s $15 million.

Shifting to the race for lieutenant governor, incumbent Dan Patrick has a solid double-digit lead over Democratic challenger Mike Collier. Patrick leads Collier 39%-28% among registered voters, a margin that increased 3 points from August poll results. That now makes Patrick the strongest Republican candidate on the ticket.

According to the poll, although Patrick has slightly more disapproval ratings in how he is handling his position, he is capturing more of the undecided voters when compared with August results. Even with the Republican overturning of Roe vs. Wade providing a boost to Democratic candidates nationwide, the current poll suggests a relatively seamless victory for the Republican lieutenant governor in November.

The poll also revealed less party support for Collier. Patrick locked in 73% Republican party support, while Collier’s support among Democrats only reached 58%. The two candidates were nearly evenly split among independents, which does give Collier some opportunity to close in on Patrick’s 11-point lead.

The pollopens PDF file also revealed a few interesting anecdotes about surveyed Texas voters. On a 7-point scale, the majority considered their political views a moderate 4, at 29%. Fifty-four percent believe Texas is heading down the wrong track, as opposed to 44% who believe the state is moving in the right direction. School choice, which allows parents to use federal funding to send their children to private schools, has 34% of voters that strongly support the initiative and 26% that somewhat support the measure. The poll also highlighted that 28% of those surveyed are highly in favor of permitting teachers and school officials to carry guns in schools.

Municipal elections are also on the Nov. 8 ballot across the metroplex, with races for county clerk, district clerk, district attorney, treasurer, county constable, county commission, community college board of trustees and judicial offices.The last day to register to vote in the midterms is Oct. 11.