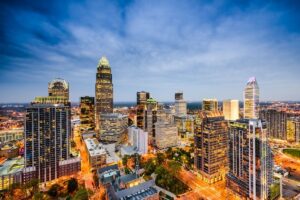 2 min read February 2022 — On Tuesday, the Charlotte Regional Business Alliance announced the resignation of  Kimberly Henderson, its Executive Director of the Employer Office of Inclusion and Advancement. The news is a blow to an ambitious program to improve racial economic equity in the city.

Henderson had started in her position at the Alliance just two weeks prior. She was expected to lead the mayor’s Racial Equity Initiative, a private-public partnership announced in November 2021.

It is unclear if the resignation will have a significant impact on the initiative in the long run. According to Henderson, she believes “the work of the Initiative is too critical to be jeopardized in any way by public misperceptions related to prior leadership as a Cabinet Director in Ohio and appointment as Executive Director.” She resigned over a controversy related to a criminal investigation into fraudulent claims at the department where she had oversight. Henderson herself is not the subject of any criminal investigation.

Invest: previously met with Janet Labar, the president and CEO of the Charlotte Regional Business Alliance, where she discussed the Racial Equity Initiative. The “public-private partnership is dedicated to a more equitable Charlotte. The initiative focuses on the development of six corridors of opportunity that the city of Charlotte has identified that have been historically under-invested. We are also focused on bridging the digital divide to make sure that young people and their families have access to the technology hardware, software and skills that facilitate access to education and careers.”

The past two years have been turbulent ones for racial equality throughout the country, including Charlotte. Following the death of George Floyd and the resulting nationwide protests, Mayor Vi Lyles wrote an op-ed in the Charlotte Observer, saying, “it’s time to remain uncomfortable. We need to have the uncomfortable discussions, be uncomfortable in our approaches, and embrace the uncomfortable because that is where growth and change lives.”

The city of Charlotte gave $72 million and the Charlotte Mecklenburg Library another $8 million.

In fact, according to data from the Urban Institute in 2016, Charlotte placed 180th on the list of 274 cities ranked based on overall inclusion, 157th for economic inclusion and 183rd for racial inclusion. Progress has not been slow, however. From 2013 to 2016, the city’s economic health went up eight places, from 86th to 74th. More importantly, the economic prosperity was inclusive: During the same period, the city climbed from 189th to 180th on the overall inclusion rankings by the Urban Institute.

The official statement of the initiative quotes Lyles saying: “The issues we face as a community are bigger, broader and more deep-seated than any one organization can address alone.” According to the Urban Institute’s profile of North Carolina, the state has a Gini Coefficient, which demonstrates the degree of income and wealth inequality, of 0.472, compared to the nationwide average of 0.481.