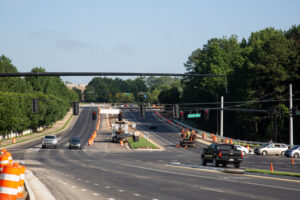 2 min read February 2021 — Despite the coronavirus-related challenges, Gwinnett County’s Sugarloaf Community Improvement District (CID) is working full-steam ahead on its security- and infrastructure-based projects to position the district as a competitive business location in a post-pandemic future.

With a recently instituted Flock camera system, the Gwinnett-based self-taxing district is expanding its commitment to safety and security within its district. Additionally, the CID is taking the lead on a feasibility study for the Loop Trail, a major trail that is part of Gwinnett County’s master trail plan. “The Sugarloaf CID has solar-powered advanced technology Flock cameras located throughout our district to capture license plates day or night,” Sugarloaf CID Executive Director Alyssa Davis told Invest:. “The Gwinnett Police have access to real-time info to immediately respond to alerts and solve crimes.”

From theft to car break-ins to identifying dangerous suspects, the addition of the Flock camera system has reliably helped the local police department in responding to these offenses. “We had an uptick in car break-ins early last year and the majority of those incidents were committed by several crews from out of Atlanta. Police used our cameras to locate suspect vehicles, tracked their progress and detectives were able to identify suspects and charge them,” Davis said.

“A stolen truck was picked up on one of our cameras. In the traffic stop, officers found drugs, weapons, and counterfeit money in the truck, and identified the driver as a wanted suspect in an armed robbery outside the CID,” Davis said, recalling another incident. “Prior to having him picked up by our cameras, the detectives investigating the armed robbery had no leads on his whereabouts,” she said.

The growing population of Gwinnett County provides the CID the opportunity to guide key mobility and connectivity options to the benefit of residents of the district and the broader community. A study is currently underway for the 14-mile segment of the larger 17-mile Loop Trail. “What’s exciting about this project is that it is connecting. It will provide bike and pedestrian connections between parks, major activity centers, and cities,” Davis said.  “The Sugarloaf CID saw the opportunity to take an active role in advancing the section of trail in our area. We don’t have parks in our district, and with a growing population we saw a need for trails and greenspace.”

As a self-taxing district, the CID leverages commercial property tax dollars to make improvements in the area. Founded in 2016, this marks the latest step to advance the CID’s Livable Centers Initiative (LCI) master plan.

“The Loop Trail will provide an important connection between our district and the larger Gwinnett community. Through our Sugarloaf LCI Plan, we have plans for more trail spurs to connect our businesses and residents to the Loop Trail and key destinations. It will add to ways to get around without a car, providing an important transportation alternative. It also provides a way to get exercise and will also help people discover more destinations and businesses within walking and biking distance. It will add much needed greenspace access for the Sugarloaf area,” Davis said.

More recently, the CID in conjunction with the Gwinnett Department of Transit completed a major roadway construction project on the Sugarloaf Parkway. “The project added an additional lane in each direction between I-85 and the new entrance to the Infinite Energy Center parking decks as well as improvements to the Sugarloaf Parkway at Satellite Boulevard intersection. This project was funded by the Gwinnett County SPLOST program and the Sugarloaf CID. The CID contributed funding for aesthetic upgrades, including mast arms, pavers and landscaping. Final landscaping is being installed now, and we have gotten a grant for work on phase II of the project to continue the improvements to Sugarloaf Parkway up to Meadow Church Rd,” Davis said.