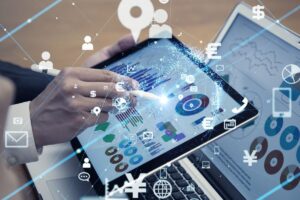 December 2021 — The economic impact from COVID-19 has slammed industries from construction to healthcare to retail — with one of the most critical economic challenges being a severe lack of workers to meet demand. For the technology industry, the shortage of workers isn’t new but the problem has been greatly accelerated, and tech hubs around the country, including Charlotte, are feeling the pinch more than ever.

In fact, demand for technology jobs in North Carolina rose 43% year over year in October, according to the December IT Jobs Trend reportopens PDF file from the North Carolina Technology Association. In a new all-time high, the number of technology positions open in October 2021 was 45,020 for all regions of North Carolina compared to 31,384 in the year-earlier period.

Despite the soaring demand, companies are hard-pressed to fill roles as workers are leaving the industry in droves. Nearly three in four tech workers across the country are considering quitting their jobs in the next year, according to a survey conducted by TalentLMS and Workable released in October. Top concerns for employees include limited career progression, inflexible work hours and having to deal with toxic work environments. In another survey released in October, conducted by CNBC, 57% of tech executives said that staffing shortages are a top concern.

“In the face of so much uncertainty, companies must look inward and devise clever solutions on how to retain tech talent. With a staggering 91% of tech workers wanting more training from their employers, planning for training opportunities in 2022 could be an easy way to start the new year off on the right foot,” the IT Jobs Trend report stated.

A 2021 report by the Computing Technology Industry Association showed the Charlotte-Concord-Gastonia MSA has recorded net growth in technology jobs, with total net technology employment for the MSA standing at 99,705 jobs for 2021 and a projected 2.9% growth for technology jobs in 2021 over 2020 (a total of 2,906 jobs). In 2020, there were 75,836 technology job postings in the MSA, and 23% of those postings were for emerging tech employers. Of all the metropolitan areas in the United States, the Charlotte MSA ranked 25th for net tech employment, and 12th for net tech jobs added.

The battle for employees was also highlighted in a December report by the Charlotte Business Journal that outlined the fierce competition in the technology sector, with smaller firms in the Charlotte MSA competing with the likes of Facebook and Google. A conference held in Charlotte in November by the Casual Executive Summit, also pointed to tech shortages, with executives in the industry speaking on challenges finding enough educated, well-trained employees.

According to an analysis by the National Foundation of American Policy, there were 1.2 million active job vacancy postings for technology positions, such as software developer or programmer, in the United States in September, which was up 15% from six months prior. In total, the U.S. labor force is short 4.3 million workers compared to the February 2020 level, with the participation rate at 61.6% in September 2022 compared to 63.3% in February 2020, according to data from the Wall Street Journal.

The shortages, however, are also driving companies to find efficiencies and improve automation technology or AI technology, a fast-growing sector in Charlotte.

“We are seeing a large shortfall in professional services, which currently has 1.5 million job openings. But the shortage has driven innovation and disruption and how that plays out in the next 18 to 36 months will be telling for how we do business,” said John Bly, regional managing partner for the South Atlantic at Aprio LLP, in an interview with Invest:. “You can’t produce the same amount in the same old ways with fewer people, so there will have to be automation and efficiency gains.”

North Carolina-based Novant Health, for example, rolled out in October an artificial intelligence tool that provides a virtual assistant and physician matcher tool. The virtual assistant can answer medical questions, as well as help patients find information for COVID-19 testing and vaccinations and schedule telehealth and physical appointments.

Other solutions on the table for the shortage in technology jobs include providing more training programs, higher education programs, job certifications and opening immigration opportunities for high-skilled technology workers abroad.