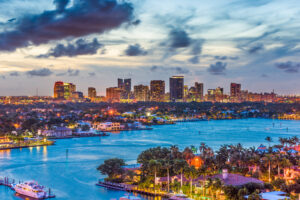 2 min read June 2021 — Balancing the health of the local citizenry and business ecosystems in the face of a modern pandemic has been a herculean task for local, state and federal government officials. The onset of the pandemic forced elected officials to tackle the unprecedented disruption and the resulting socioeconomic challenges while still finding ways to continue growth in their communities. More than a year into the pandemic landscape, many key economic development projects and initiatives were able to persist despite the overall disruption.

While the pandemic necessitated the full attention of local civic leaders, the municipalities across Broward County were able to capitalize on some of the silver linings that rose to the forefront amidst the quickly changing landscape. For example, infrastructure projects in the city of Fort Lauderdale continued without interruption during this time, Fort Lauderdale Mayor Dean Trantalis told Invest:.“When COVID-19 came into our community, we did not stop the other things we were doing,” Trantalis said. “Infrastructure projects that had been launched continued to move ahead, we did not miss a step. It was even helpful because with no people on the streets and fewer cars, we were able to allow our contractors to carry out drilling and installations when a busier time would have impeded such fast-paced progress. Our infrastructure projects are ahead of schedule and under budget.”

In Oakland Park, the city is bustling with new developments slated to drive growth opportunities for businesses and residents alike. Located in an opportunity zone, the Downtown Culinary Arts District is a key economic development project anchoring opportunities for the city of Oakland Park, Mayor Jane Bolin told Invest:. “We passed a $40-million bond to redo our facilities, including modernizing our community center, our library and our three fire stations,” she said. “We have development all over the city, over an 8.5-mile radius. When you start to see the city is developing not just on the east side but throughout the entire city, that is a real opportunity when looking at investing in Oakland Park.”

Public private partnerships, strategic agreements that share development risks and responsibilities with private developers, are also creating opportunities in Oakland Park. “We are also on the cutting edge of public-private partnership. Our city hall is going to be the anchor tenant for a project called Oakland Park Square, a $48-million project. One of our three fire stations is also a public-private partnership with Cubesmart. The city itself and its elected officials lean heavily toward innovative thinking. Because we have development happening throughout the city, there is opportunity everywhere,” Bolin said.

In Pompano Beach, recent developments in the Innovation District, a project heralded by the Pompano Beach Community Redevelopment Agency (CRA), is fueling optimism for a successful post COVID future. “The Innovation District is moving forward. Just recently, the Land Use Plan Amendment was approved which was a year-long process,” Pompano Beach CRA Director Nguyen Tran told Invest:. “What this means is that additional entitlements were received to increase residential use to 3,368 units, commercial and general business use to over 4 million square feet, office use to over 2.8 million square feet and hotel use to 420 rooms.  The Innovation District is the creation of a Downtown area for the City of Pompano. Downtowns are critically important to cities as they are the heartbeat of every city. They are employment centers, areas of high-density residential, office locations and places to find entertainment including arts and culture,” Tran said.

Similarly, the city of Hallandale Beach is actively working to leverage its community redevelopment agency and bonds to make needed infrastructure improvements while attracting new development and investment in the community.

“We have a Community Redevelopment Agency through which we are investing millions of dollars in our local community,” City Manager Dr. Jeremy Earle told Invest:. “In 2020, the agency’s board approved a $20-million loan for infrastructure — LED streetlights, new sidewalks, 3,000 new canopy trees, to name a few of the improvements toward sustainability. We are also injecting $40 million worth of utility revenue bonds that we are going to use to fix our pipes.”

On the economic development side, the city has budgeted millions of dollars on business investment over the next few years, Earle said. “For 2020 alone, we budgeted $1.5 million to that end within the city, together with residential developments. We are also putting in place developer-aimed incentives to attract new multifamily developments, affordable housing and new businesses. For our $3 million in investments in local business attraction, we anticipate obtaining $6.5 million in private sector investment.”

In the current economy, local civic leaders are working to ensure business owners and local residents have the resources they need to be successful. The aforementioned leaders will all participate in Invest: Greater Fort Lauderdale’s launch conference happening on Wednesday, June 16 via Zoom. The panel, “Operation recovery: How our civic leaders are encouraging economic growth and community engagement in a recovering market,” will explore how these leaders are positioning the local market for a robust economic recovery. Moderated by Greater Fort Lauderdale Alliance Vice President of Business Development Todd Holt, the panelists will discuss the economic growth and community engagement initiatives slated to carry the recovery process in the local market.