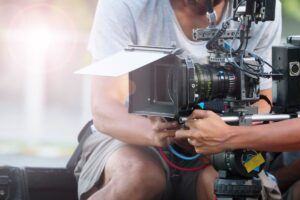 2 min read August 2021 —  The cameras are ready to roll in New Jersey as the state works to bolster its film industry. A newly constructed multi-purpose studio and attractive tax incentives are the latest developments setting the stage for a new era of film and video production in the state.

The 2018 reinstitution of the state’s film credits was a pivotal first step in the resurgence of New Jersey’s film and tv industry. With the incentive and tax component institutionalized, Jersey City is now home to the largest film studio in the state. Inaugurated this week, the Cinelease Studios, located in Caven Point, is the largest and first-purpose built facility of its kind in the state and is ready to draw new productions to the region.

“When we reinstated the film tax credit in 2018 and expanded it late last year, this is exactly the type of project we envisioned,” Governor Phil Murphy said in a press release. “New Jersey is where filmmaking began, and we are quickly regaining the reputation as a premier location for both film and television production.”

In the era of streaming, on-demand content and rising diversification of niche TV and film platforms, the film industry is a key way to leverage New Jersey’s historic backdrops while harnessing the creative energy of the tri-state area and beyond. In 2019, film and television productions in the state resulted in more than $420 million in economic activity, the governor’s office reported.  With a host of new movies, television series and commercials happening in New Jersey, the state is on track to surpass that number in 2021.

“The New Jersey motion picture and television industry has grown exponentially in the last few years, and the arrival of Cinelease Caven Point, a state-of-the-art studio complex, creates a complete production environment here,” Steven Gorelick, executive director of the New Jersey Motion Picture and TV Commission, said in a statement.

In the southern part of the state, the newly created South Jersey Film Office Cooperative serves as a portal to producers considering South Jersey for their productions. The Office is tasked with consolidating the services necessary for film production in the area while informing filmmakers about the attractive tax benefits offered by the state.

“The state has a 30% tax credit statewide. For South Jersey, including Gloucester and Camden counties, the tax credit is 35%, and we have to give credit to our state leaders in implementing these credits. Frankly, we’re competing with every other state in the nation and other than in California, filming only takes place in states that offer these types of credits,”  Louis Cappelli Jr., commissioner director of Camden County and representative of the South Jersey Film Office Cooperative told Invest:. “For us to be competitive across the nation, these credits are necessary and are a wise move by the state of New Jersey. This is a very smart investment. These incentives are in place to bring production studios here. It’s the same thing we do to attract other forms of businesses: making it more affordable to do business here. At the Cooperative, we’re looking at developing a process to make the application and acquisition of tax credits more accessible for these companies,” he said.

As the Garden State looks primed to rival markets such as Atlanta, Los Angeles, and New York City for productions, movie lovers may recognize New Jersey backdrops in some recent blockbusters and fan favorites. Recent film productions shot in the state include  “The Joker,” “West Side Story” and “The Plot Against America,” the Jersey City Times reported. Other recent productions include “The Equalizer” starring Queen Latifah, Hulu’s “Wutang: An American Saga” and Peacock Network’s “Dr. Death”.