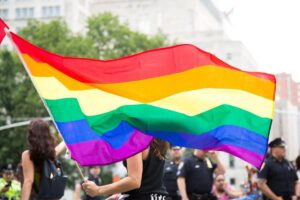 3 min read August 2021 — At the heart of the AllianceBernstein, Amazon and Oracle announcements lies Nashville’s status as a progressive, inclusionary community. However, a “record-breaking year” of discriminatory legislation in the state of Tennessee is threatening the inclusive atmosphere that has played a significant role in the region’s recent economic development and growth, said the head of the Nashville LGBT Chamber.

Joe Woolley, the Chamber’s CEO, described to Invest: the significance of inclusionary policies to major companies considering Nashville for relocation or expansion. “We were at Alliance Bernstein’s Christmas party and their COO at the time, Jim Gingrich, looked at me in a big crowd of people of other chamber leaders, business leaders and government leaders, and he said, ‘You know why we’re here and not in the other city we were considering? Because we think that other city is in a state that’s going to have an anti-LGBT bathroom bill. Make sure that we don’t.’”

Since this encounter, the state of Tennessee has indeed passed not one, but two bathroom bills.

“Every year, we have seen more and more anti-LGBT legislation. This year was a record-breaking year and a really bad legislative session in terms of discriminatory legislation. Tennessee had the most anti-LGBT laws filed, the most anti-LGBT laws passed and we are the first state to pass a bathroom bill since North Carolina in 2016,” said Woolley. The more troublesome of the two bathroom bills requires businesses with inclusive bathroom policies to post a large sign on their door that spells that out.

As Woolley explained, other states have experienced the consequences of passing such legislation. “From the North Carolina bathroom bill, the conservative estimated loss to that state was $3.5 billion. We warned of this fallout, and now we’re seeing this fallout with businesses and conventions looking at the state and considering going elsewhere or not coming,” said Woolley.

Not only are outside companies reconsidering their views of Nashville, but large companies that have made the commitment, such as Amazon, are experiencing anxiety among their employees. “Amazon is just one company that will tell you they are having a hard time with employees wanting to stay here. They have to fill 7,500 jobs in two towers in Downtown Nashville. They’ve started that process and they have had employees come to them and say, ‘We don’t want to live here anymore. This is not where I want to call home.’ They had moved to Tennessee to work here in Nashville, then we passed these bills and now they’re scared,” Woolley told Invest:.

It is not just LGBT employees who are worried about their present and future well-being in the city but also employees who have LGBT children. “Transgender individuals and parents of transgender children are scared of where they can go to the bathroom and if they can receive the healthcare they need,” said Woolley, further explaining how anti-LGBT healthcare laws are also of major concern.

The economic impact of these bills has yet to be seen, but it is certainly clear that companies considering Nashville aren’t leaving their values at the state lines; they’re bringing those values with them, and they want to ensure their LGBT employees and LGBT children are safe and valued in this state, Woolley said. “If you can’t get people of color, LGBT people or parents of LGBT children to move to your state, you’re excluding a huge piece of the workforce.” If companies can’t attract diverse talent to the Nashville region, it may become hard to justify relocation or expansion. With Nashville composing 40% of the state’s economy and 60% of its tourism economy, Tennessee as a whole would experience any negative impact on Nashville.

However, Nashville does remain an attractive location to do business. “We are perfect on taxes, incentives, benefits, startup costs and workforce. We meet all of the criteria of businesses that want to come here and open up shop,” stated Woolley. “Their one concern is if this is a welcoming, inclusive place to live and work.”

Woolley is actively pressing the local business community to extend their support, and support is quickly growing, “We had 23 corporations speak out the year after Alliance Berstein did, and it has only grown from there.” Under Woolley’s leadership, the Nashville LGBT Chamber has grown approximately 50% with over 500-plus members.