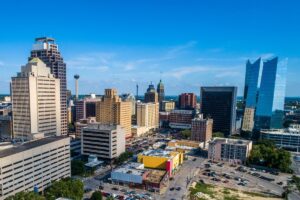 2 min read September 2021 — Residential sales in San Antonio could be beginning to cool off. Home sales in San Antonio fell 9% in July compared to last year, marking the first decline since the pandemic began over a year ago. This recent metric lends itself to the question: is San Antonio still a seller’s market?

COVID-19 created a buying frenzy as residents were quick to ditch densely populated cities for more suburban areas with greater living space. This was a result of the opportunity to work from home in an area with a lower cost of living and nationwide low interest rates. Over a year later, demand in many suburban areas across the United States is still outpacing supply, giving sellers the upper hand as bidding wars continue to transpire as a result of limited inventory.

According to U.S. Census Bureau figures, the population in the San Antonio metro area jumped to an estimated 2,295,303 people as of July 1, 2020. That was an increase of 3% from the prior year, the fastest population growth among metro areas with at least 1 million people. Jennifer Shemwell, president of Phyllis Browning Co., a residential real estate company in San Antonio, recently told MySanAntonio, “Right now everybody wants to live in Texas. A lot of people are moving to San Antonio. Home prices are going to continue to go up because the demand is outpacing the supply… I see that going up for years to come.”

Recently, however, the housing metrics have begun to shift. According to data releasedopens PDF file by the San Antonio Board of Realtors, in July 2021 there were 3,885 single-family home purchases, down from 4,285 sales in July 2020, a 9% decline month over month. So is this drop in July signaling the end of the housing boom in San Antonio? Not according to Kim Bragman, SABOR’s 2020 chairman of the board. She recently told San Antonio Express News, “While the numbers show a recent decline, we are still seeing movement and progress in the housing market in San Antonio, especially when compared with the state and other parts of the country. We have to remember the magnitude of what we have experienced across the world, and expect that we will see some numbers that change the trend, but we are optimistic when looking at the big picture that momentum will keep driving forward in the housing market.”

There are other potential explanations for the slowdown, including supply chain issues associated with the pandemic that are continuing to cause delays in new construction homes, contributing to a lack of inventory. Lumber in particular has experienced a significant shortage causing prices to spike, which has consequently increased the average cost of a new home in San Antonio by nearly $36,000 to about $398,000, according to the National Association of Home Builders. Jim Gaines, an economist at the Texas Real Estate Research Center at Texas A&M University recently told MySanAntonio that, “Available land is harder to come by and pricier, the approval process for getting permits is taking longer during the pandemic, and it’s difficult to find workers to build the houses.”