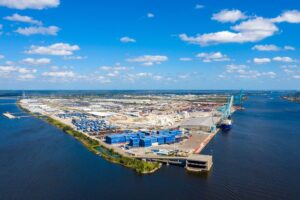 2 min read August 2021— In 2Q20 e-commerce sales soared, accounting for about 16% of all sales in the US. This growth has generated an increase in activity for auxiliary sectors, namely in logistics and transport. Over 2020, The Port of Jacksonville reported just a 6% year over year dip in operating revenues – an impressive feat considering the upheaval of last year.

According to Global Port Tracker, 2021 is on track to see a 16.7% growth over 2020 levels in terms of retail imports measured in Twenty-foot equivalent units (TEUs). In 2020, the port moved more than 1.277 million TEUs and almost 560,000 vehicles. There was also an increase in US military vehicle movements and the port’s Puerto Rican business grew by 6% for a total of 802,000 TEUs.

Just under 140,000 jobs in Florida are directly or indirectly provided by goods moving through Jaxport. It is the state’s largest container port complex and one of the busiest vehicle-handling ports in the country. Jaxport is also one of the few ports to have a Strategic Seaports designation for military activity.

The port has the Blount Island, Talleyran and Dames Point cargo facilities. Dames Point is the newest and spans 600 acres, encompassing the 158-acre TraPac Container Terminal operated by Mitsui. The oldest facility, Talleyrand, is set across 173 acres for handling of cars, liquid bulk, break bulk and containers. Talleyrand has six cranes and the capacity to process refrigerated and frozen cargo. The 754 acre Blount Island facility is capable of handling breakbulk, liquid bulk, heavy lift and roll on/roll off cargo.

The port has gone from strength to strength in terms of its profitability. June’s container volumes skyrocketed 16.33% year over year and 7.37% compared to 2019 levels. For the first nine months of the fiscal year, revenues are $4.73 million ahead of Jaxport’s projections and expenses $2.47 million below expectations. For the current fiscal year, the port has budgeted for $69 millionopens PDF file in total revenues.

This is all despite a delay in the return of cruises, which the port had expected to resume in March 2021. About 8% of Jaxport’s revenues and volumes come from cruises but there were still some passengers who transited through the port. Some Norwegian Cruise Lines vessels, including Norwegian Sky, Norwegian Pearl and Norwegian Sun, were berthed at the port for several months as crews and staff were repatriated. After a legal challenge from the state of Florida, the CDC lifted the restrictions on cruise ships at the end of July, allowing sailings to finally begin again.

As the 14th largest container port in the US, Jaxport makes consistent investments in its infrastructure to ensure it is operating with cutting edge equipment. In the last 10 years, the port has invested over $1 billion in terminals, equipment and access, and it has plans to invest a further $1.3 billion in the next five years. One of those investments is the purchase of 0.92 acres along Heckscher Drive and August Drive for $658,000. The port is also deepening its harbor to expand its container business, something that is expected to complete in 2022.

Jaxport has managed to strengthen its liquidity in the last year, but management knows that the future is unpredictable. That is why the additional $5 million in cost savings generated in fiscal year 2021 will be allocated to the 2022 capital budget, with any remainder going toward debt repayment. Jaxport will also receive funds from a $250 million federal stimulus package for 15 Florida ports, the amount of which will be announced in August.