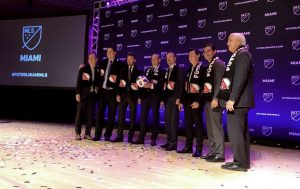 January 2018 — “Today you made my dream come true,” a giddy David Beckham, suited shoulders draped in an MLS scarf, told a small crowd gathered at the Adrienne Arsht Center on Monday, January 29.

After his first announcement four years ago fell through in the face of financing and stadium site challenges, Beckham’s dream of bringing an MLS expansion team to Miami is finally coming to fruition as the league made it official.

Beckham’s ownership group is planning to build a 25,000-seat, $225 million stadium in Overtown as the new home to Miami professional soccer. The stadium plan includes a training center and academy that will focus on developing local players. The team hopes to be deeply connected to the community — not just to the players but also to the fans. The goal is to grow locally in order to compete globally.

Miami has a complicated history with soccer. Its first MLS team, Miami Fusion, based out of Fort Lauderdale, flopped in 2001 after only a few short — and underwhelming — years. In a city known for its diversity and rich Latin American influence, it’s almost unfathomable that a futbol team isn’t already a huge part of its fabric. But while friendly matches bring out fans in droves, for some reason a home team hasn’t had the same impact.

Beckham and his co-owners hope to change that. Perhaps as they sort out the still-unannounced details — team name, colors, logo, start date — they should look to another team, in Capital Analytics’ Atlanta market, for some ideas on how to make a brand-new franchise shine virtually overnight.

In 2017, Atlanta United kicked off its inaugural season, and just five months after that first game, it had become MLS’s most popular team. It boasts the highest average home attendance in MLS history and better average home attendance than any MLS, NBA, NHL or MLB franchise in the country. Its opening weekend match was the best-attended game, by a factor of two, in the league.

“Reports have suggested we would be the 24th team in Europe with our average attendance,” Darren Eales, president of Atlanta United, told Capital Analytics, “and for our first game of the season, we had an attendance of 55,000, which put us at the fourth most attended game in the world.”

So how did this team go from nothing to record-breaking so quickly? Two words: community investment. They spent a lot of time meeting with fans in bars, pre-selling season seats and generally pounding the pavement to spread the word.

“From day one, we wanted to create the feeling that this was a club centered on its fans,” Eales told Capital Analytics, “so we did a lot of grassroots events focused on international games and viewing parties. We decided that if we focus on our most dedicated fans, the rest will take care of itself.”

They also spent some time making sure that the team would be worth watching, which included recruiting a talented coach and deeply investing in young players. Team owner Arthur Blank’s resources, such as commercial sponsorship and sales and marketing departments (he also owns the Falcons), didn’t hurt either.

If Beckham wants his Miami team to succeed, he will need to rely on more than his legendary right foot. Soccer is a collaborative sport, and the Miami MLS franchise will truly need to be a collaboration between the community and the team. All eyes on are on Fútbol Miami as the details get hammered out and we looked forward to opening day!