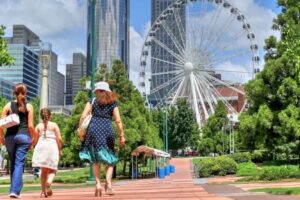 2 min read August 2021 — After the world shut down in 2020, the tourism and hospitality industries were some of the hardest hit. Leisure and travel shed 8 million jobs in April 2020 and daily traveller numbers plunged 95% to less than 100,000 passengers per day. Now, as travel begins to reopen and vaccine efforts ramp up, the hotel industry in Atlanta is beginning to see some signs of recovery.

And it’s not just leisure travel supporting these increasing numbers. According to the Georgia World Congress Center Authority (GWCCA), which oversees operations at the Georgia World Congress Center (GWCC) and Centennial Olympic Park, they are projecting rental revenue to reach $15.8 million during the 2022 fiscal year. This marks an improvement on both 2019 and 2020 levels, and represents a steady increase in demand for events and conferences. In response to this, the GWCC is planning $615 million in capital investments.

Signs of recovery for hospitality, in particular, are strong in Atlanta as two hotels located in the Central Business District recently sold for a total of $73 million. The first deal was Vision Hospitality’s $38 million purchase of Element Atlanta Buckhead, followed closely by the $35 million acquisition of SpringHill Suites Atlanta.

The W Atlanta-Midtown was also recently purchased for $160 million by Schulte Hospitality Group, working out to a rate of almost $370,000 per room. A few days prior to this, the 763-room Sheraton Atlanta Hotel was listed for sale by owner Arden Group. The owners told local media outlets that they chose to list the hotel as they saw signs of the Atlanta hotel market strengthening.

In addition to these hotels exchanging hands, construction is resuming on some developments and others are breaking ground. The $550 million Signia Hotel, which overlooks Mercedes-Benz stadium, is pushing ahead and is expected to be completed by 2023. Last year the Kimpton brand also announced construction of a third Atlanta hotel, due to be completed in 2022. The 230-room hotel located in the arts center is set to feature a second-story bar and lounge and 5,400 square feet of meetings and events space.

Many boutique hotels have also opened recently, including the Hotel Clermont, the Kimpton Sylvan, the Bellyard Hotel and the Epicurean Atlanta.

The increasing demand for hotels in Atlanta is also buoyed by an increase in passenger numbers through the Hartsfield-Jackson travel hub. After a devastating drop in passenger traffic in March 2020, the airport took steps to cut costs and capital expenditures. Now, as passenger numbers pick up to about 70% to 75% of pre-pandemic levels, the airport is well positioned to continue funnelling guests to Atlanta’s hotels.

Experts predict a multi-year recovery as a result of 2020 devastation and as the performance of higher-priced hotels patronized by business travelers remains weak. But there is plenty of reason for optimism. According to Bloomberg, Atlanta was one of the top destination cities over Memorial Day weekend, supporting occupancy for hotels in the region.