In line with its many monikers — the Alamo City, Cyber City and Military City USA — the San Antonio MSA has proven itself time and time again to be a region of opportunity. With a population of over 2.5 million residents, San Antonio has seen an economic boom over the last decade that would be enviable by most other major metropolitan areas. Rooted in industries like aerospace, bioscience and manufacturing, San Antonio is built upon a solid foundation that is primed for continued success.

Writer: Jerrica DuBois 2 min read June 2022 — As more residents continue to flock to the Lone Star State, there is [...]

What to do this Memorial Day weekend in San Antonio

Sign up to receive Capital Analytics’ newsletters, updating me on key industry and market insights. 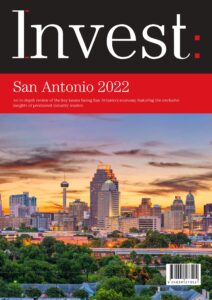 Invest: San Antonio is a comprehensive business review analyzing the key opportunities and issues within the San Antonio region. #InvestSanAntonio

Whether looking for a new home or apartment to #rent, buyers are facing #highprices and #lowinventory. But experts are starting to see signs of a turnaround in the booming #housing market.
https://www.capitalanalyticsassociates.com/real-estate-turns-up-the-heat/

#InvestSanAntonio is the latest annual business intelligence report compiled by media platform @CapitalAnalytic as part of its suite of yearly reports focusing on local & regional economies.

And that's a wrap! Invest: San Antonio 2022 has officially been released, and a big thank you to all our sponsors, speakers, and interviewees that made today possible. #Invest #InvestSanAntonio #Texas

Another fantastic discussion for #Invest on #innovation and #crativity. A big thank you to all our moderator Elizabeth Crawford of @senderowealth and speakers Jeff Sinnott of @Vantage_Bank, @UnivHealthSA ‘s own Bill Phillips, and Rick Archer of @OverlandPartner

Nashville’s tourism industry gearing up for strong summer despite inflation

What people are saying
"I can see where readers that are looking to relocate glean a lot of information from it and look forward to the updates."
Randy Harig,
CEO, Texas Research & Technology Foundation
"I like the title. I think Invest: within our local community is excellent, especially with your target audience. It very much makes sense with what the publication is trying to do."
David Blank,
CEO, Health by Design
"You picked a great city, and having a resource like your publication just makes sense."
Chris Kimler,
SVP, Wealth Management Managing Director, First Horizon Advisors
"I don’t know of anything that we have like it, and I think it’s timely."
Cris Daskevich,
CEO, The Children's Hospital of San Antonio
“I was very, very impressed. I think it gives such a good picture, and I’m surprised we haven’t had somebody put together something similar.”
Erin Cestero,
President - San Antonio Division, JB Goodwin Realtors