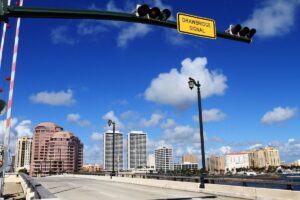 2 min read March 2022— Infrastructure development in South Florida isn’t keeping pace with the rapid boom in population, leaving local officials to become more innovative in their approach and encourage cultural shifts — like biking to work — while also trying to come up with funds to pursue critical infrastructure needs.

Palm Beach County saw a 16.23% jump in population from the 2010 U.S. Census to the 2020 Census, and the COVID-19 pandemic, and the subsequent flight to high-quality-of-life locations across the country, has set fire to that trend. According to the Palm Beach Post, over 547,000 people exchanged out-of-state driver’s licenses for Florida licenses in 2021, which is a 40% increase over 2020 and a 20% increase from the five-year average between 2017-2021.

That suggests more drivers on the road, which is not what cities necessarily want. Next week, for example, the city of West Palm Beach is celebrating “Bike to Work Week” to “to elevate bicycling as a more widely accepted choice of transportation,” according to a city announcement.

“Our biggest challenge is dealing with the growth that comes from being an attractive place to live, work, learn and play,” said Scott Singer, mayor of the City of Boca Raton, in an interview with Invest: last year. “Boca’s strong planning for the future has prepared us for the effects of our success. We have to have infrastructure for a larger city.”

In addition to ideas like adding bike lanes, area officials are hoping to expand public transit services and increase the attractiveness of these services for residents and tourists.

“We’re looking into ways to invest in enhanced safety and reliability for these systems so that we can attract more people to potentially use our transit services in lieu of driving,” said Nick Uhren, Executive Director of the Palm Beach Transportation Planning Agency, in a 2021 interview with Invest:. “Our roads are not as big as they need to be to support all the people who want to drive on them right now, but many of them are bigger than we want them to be to support the local character of our communities. … If we invest in connected corridors for enhanced transit services, if we rebuild our street networks to be safe for pedestrians and bicyclists, then we’ve actually provided a system that will allow people to move around Palm Beach County in a car-optional future.”

Infrastructure planning needs to take into account the steady stream of new residents but also tourists. Singer said that even though the population of Boca Raton is about 100,000 residents, in the tourist high season it hosts about 250,000 people.

Some relief can be expected in the form of the federal infrastructure bill passed last year, with some $20 billion of the national $1.2 trillion in federal funds earmarked for infrastructure projects in Florida in the coming years. However, at least some of the funding allocation for infrastructure numbers are using 2010’s U.S. Census numbers, which doesn’t take into account Florida’s rapid population growth and new, critical infrastructure needs.

Additionally, in a ranking compiled by U.S. News & World Report, Florida is expected to get the least in per capita funding from the infrastructure bill. Of Florida’s total, $13.1 billion is dedicated to highways; $245 million to bridge repairs; $2.6 billion for public transportation and $1.6 billion for water infrastructure. Palm Beach County and its cities are not sure how much federal funding to expect.