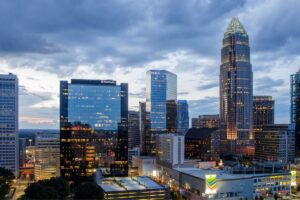 2 min read May 2022 — An interest rate increase is expected to be announced this week on Wednesday following the May 3-4 Federal Open Market Committee (FOMC) meeting. Charlotte’s business community leaders have mixed thoughts on how these rate hikes will impact the local economy.

Although financial institutions might benefit from the increase, its full effect on the economy could be mixed. “The extended period of low interest rates has its implications for financial services, but it is a tool that stimulates local economies and keeps businesses and job growth,” said Heath Campbell, president of the Charlotte Metrolina Region for Truist, in an interview with Invest:.

The Federal Reserve shared plans to raise interest rates throughout the year to contain inflation, which has escalated to 8.5% as of March 2022, according to the Bureau of Labor Statistics. At the March FOMC meetingopens PDF file headed by Fed Chairman Jerome Powell, the Federal Reserve boosted its key rate 0.25% and indicated plans to continue upward adjustments until a 2% inflation rate is achieved. That could take awhile, according to Powell, who said at his March 16 press conference announcing the rate rise that, “inflation is likely to take longer to return to our price-stability goal than previously expected. The median inflation projection of FOMC participants is 4.3 percent this year and falls to 2.7 percent next year and 2.3 percent in 2024; this trajectory is notably higher than projected in December, and participants continue to see risks as weighted to the upside.”

Charlotte’s GDP for 2020 grew slightly over 2019 levels despite the pandemic, and it has only risen further since. “You could make an argument that Charlotte is the hottest city in the United States right now. Charlotte is not only the second-largest banking center in the country, it is one of the fastest-growing and most progressive cities in the country,” said Richard Worrell, managing partner  for Northwestern Mutual in Charlotte, in an interview with Invest:.

However, the economic expansion has left residents in a vulnerable position. “We already know affordability will get squeezed a little more because interest rates are predicted to go up three to four more times this year. Rates will likely inch up a quarter percent at a time over 2022. For every 1% increase, it reduces the affordability for someone looking to buy a home by about 18%. It’s an extraordinary phenomenon,” Lee Allen, president of The Canopy Realtor® Association, told Invest:.

While interest rate hikes reduce purchasing power and make homes more expensive to buy, it is uncertain if higher rates will be enough to cool down Charlotte’s on-fire housing market. “Demand continues to increase but rents are also rising at historical rates. We are focused on building as much housing as we can to alleviate that but there is not enough housing in general to keep pace with the population growth,” Lee Cochran, senior vice president of Laurel Street, told Invest:. His opinion resonates with many experts in development and construction who attribute the increase in home prices to low inventory and high labor and material costs.

For its part, the Fed is striving for soft landing, without driving the economy into a recession. “The Fed’s monetary policy actions have been guided by our mandate to promote maximum employment and stable prices for the American people. Our policy has been adapting to the evolving economic environment, and it will continue to do so,” said Powell.