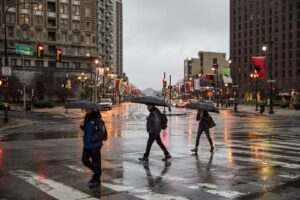 2 min read September 2021 — As the floodwaters settle on the Northeast coast and cities assess the damage from Hurricane Ida, the pending federal infrastructure bill could be the solution for cities like Philadelphia to make infrastructure improvements and be better prepared to face future disasters.

The destruction from Ida in Philadelphia was significant. The Schuylkill river overflowed, leaving entire neighborhoods, such as Manayunk, paralyzed. Amtrak stopped its operations for several days. Even utility company Aqua had to issue a communication via Twitter asking residents to stop all non-essential use of water. Five people have died so far from storm-related incidents in Philadelphia alone, according to the Philadelphia Inquirer.

Philly received on average three to five inches of rain during the storm, but some places saw up to eight. The Schuylkill River, for example, had not reached the levels seen due to the storm in 100 years, according to Politico. The river’s waters caused destruction that will take the city months to clean up.

Funds from the looming infrastructure bill will help shore up the state’s structures, including those in Philadelphia. The Pittsburgh Post-Gazette estimated that the state would receive $11.3 billion for roads, $1.6 billion for bridges, and $2.8 billion for public transit. This money would cover climate-related projects that government officials request for their communities, like the $500 million flood mitigation and water infrastructure bill for Eastwick.

As noted by the Report Card for America’s Infrastructure of 2018, Philadelphia has been improving its score in construction by advancing 2,600 transportation projects, including roads and bridges. However, the city was also downgraded to the Ds in wastewater, drinking water, stormwater and waterways management. The Commonwealth got an overall grade of C- reflective of Pennsylvania’s old infrastructure and the lack of money for updating and maintaining it until now.

The infrastructure bill would come at a perfect time for Philadelphia. The package includes $46 billion for coastal defenses against flooding, like those in New Orleans, which were tested by Ida. Chuck Perrodin, the spokesperson for Louisiana’s Coastal Protection and Restoration Authority, told Politico the $14.5 billion new hurricane defenses around greater New Orleans “have passed with flying colors.”

So far, the estimated cost of losses caused by weather incidents is $25 billion for Ida, $65 billion for Katrina, $15 billion from Texas’ winter storm, and $10 billion from Hurricane Laura, according to estimates from credit rating agency Fitch. AP also estimates that the 22 climate disasters the United States experienced in 2020 resulted in losses in excess of $1 billion each. The infrastructure bill will devote money to fixing what is in dire need of maintenance and “future proofing” infrastructure to sustain more extreme climate events, according to Jeff Davis, a senior fellow at Washington think tank Eno Center for Transportation, as quoted in the AP article.