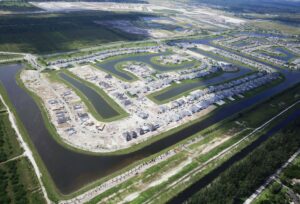 3 min read February 2021 — Through thick and thin, crisis or no crisis, there are a few things in life that stay constant, one being the bothersome reality of getting older each day. As life expectancy and average age continues to increase, the number of senior living facilities is also increasing to meet demand. Florida, known for its older population, is experiencing an expansion in senior living, especially in Palm Beach County.

Recently, Protea Capital Partners obtained an $18.2 million construction loan for a senior living project west of Boca Raton, which will provide approximately 116 beds. In West Palm Beach, construction of The Watermark, which will provide 154 units, has also begun. A similar, larger project by the same developers, The Watermark at Merrick Park, will have 196 units; $66.27 million of bonds have already been closed for the Merrick Park project. Announced in late 2020, the Toby and Leon Cooperman Sinai Residences of Boca Raton closed bond financing for a $160 million expansion, adding 111 independent living residences and additional communal areas. As well, a new congregate living facility was approved in December 2020 by Wellington’s Planning, Zoning & Adjustment Board. The list goes on and on.

Of course, the reasoning behind these investment decisions is the anticipation of an aging population. Greg West, CEO of ZOM Living, which is one of the developers of The Watermark properties, stated in an interview with the South Florida Business Journal, “At ZOM Living, we recognize the demand for senior living communities as our population over the age of 65 is set to grow by more than 10,000 people per day through 2035, moving over 50 million into that age bracket. This is fueling pent-up demand for rental units catering to seniors seeking an active lifestyle in walkable neighborhoods close to shopping, dining, entertainment and cultural offerings.”

Entirely new communities are also being created to cater to Palm Beach County’s aging demographics. Recently, Westlake celebrated its fifth anniversary. Minto Communities has been the main developer of the city that seems keen on attracting older residents. In April 2019, Minto Communities sold 270 acres to Kolter Homes for $52 million, with the purpose of building 800 homes for adults aged 55 and older. This 270 acre community is known as Cresswind.

As stated by the Brookings Institution, “Between 2010 and 2020, the number of people over age 55 grew by 27%, which is 20 times larger than the growth rate of the collective population under 55 (1.3%). The largest driver of this divide is the baby boomer generation, who passed the age of 65 during the past decade, increasing the size of the 65- to 74-year-old age group by a half.”

With Florida having the second-highest percentage of population within the 65 and older age group of all states across the country, and Palm Beach County having a significantly higher 65-plus population rate than Florida’s average, investors in Palm Beach County are bullishly expanding housing to accommodate this age group.