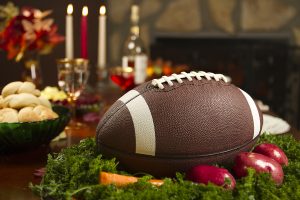 2 min read NOVEMBER 2019 — On Thanksgiving, there is only one thing that comes close to turkey in importance for Atlanta sports fans, and that’s the NFL’s game schedule. This year, the Atlanta Falcons will be one of three teams hosting the Thanksgiving Day games, facing off again the New Orleans Saints.

This will be the Falcons’ fourth Thanksgiving Day game, and having lost against the Saints last year on their home turf, this one is sure to be a must-watch. Those fans going to watch the game live could also feel a little pain in their wallets: Last year’s Saints-Falcons game was the most expensive Thanksgiving Day game for fans, with an average ticket price of $518 on the secondary market.

No doubt, Thanksgiving football is big business for the NFL. In 2018, NBC’s primetime viewing of the Falcons-Saints game brought in an 11.4/24 rating, up 18% from 2017’s Washington-New York Giants primetime game on NBC and the network’s best Thanksgiving night NFL performance since 2015. For the rights to a selection of high-profile games that includes the Thanksgiving game, Super Bowl Broadcasts and Thursday Night Football, NBC is paying $1.1 billion a year to the NFL.

That explains why the tradition stuck, but why did it start? Although it doesn’t quite go back to The Mayflower, the Thanksgiving game is a long-standing tradition spanning back as far as 1920. Political upheaval during the time meant the games were sporadic, but eventually in 1934, George A. Richards bought the Portsmouth Spartans, renamed them the Detroit Lions and gave Thanksgiving another try.

This was largely a solution to the problem of low attendance during the year, but the Thanksgiving game became a rousing success. First, people already had the day off work and second, it became an escape for those looking to perhaps spend less quality time with family. More than 26,000 people booked tickets weeks in advance and reportedly thousands more were turned away at the gate.

In 1966, the Dallas Cowboys saw the success of the “Detroit Lions vs…” games and decided to get in on the action. Since then, both teams have played each year, with one additional game added to the roster. This year’s Falcons-Saints game will be played in the new, state-of-the-art Mercedes-Benz stadium – “the finest sports and entertainment facility in the world,” according to Dan Corso, president of the Atlanta Sports Council.

The stadium was funded by a largely taxpayer-based system, in a $2.4 billion investment based on bonds and hotel taxes. And Mayor Keisha Lance Bottoms believes the stadium may allow Atlanta to host many more high-profile sporting events, including these popular Thanksgiving games. “I think it’s well worth the investment, and when you look at the long-lasting impact and our ability to showcase Atlanta, sometimes you have to spend a little money to make a little money,” she told USA Today.