How Broward is Solving its Transportation Troubles

How Broward is Solving its Transportation Troubles 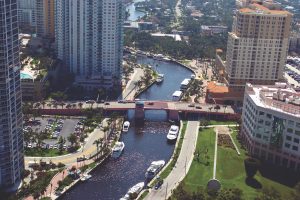 4 min read October 2019 —  For over a century, the car has been America’s top transportation choice when getting from point A to point B. As the population in the United States has grown exponentially year over year, so has the dependency on these vehicles, which has led to worsening transportation issues like congested roads, air pollution, traffic accidents and in some cases fatalities. Throughout South Florida, in this case Broward County, the negative effects of the population’s dependency on single-occupancy vehicles are rampant throughout the region. While these issues pose a major challenge to Broward, there is hope as the younger generations are looking to avoid the stress of car ownership, and many community leaders and organizations are making a push toward better mass transit and alternative transportation options.

While these are not all new ideas, in the last couple of years the emphasis for Broward has become truly exploring and executing these ideas. This starts with the  30-year Penny For Transportation Surtax that was passed last November and is set to generate billions of dollars toward improving transportation and mass transit options throughout the county. Invest: recently spoke with Monica Cepero, deputy county administrator for Broward County, who discussed what the community could expect from the revenues generated by the tax. “This sales tax is set to generate about $16 billion over the next 30 years, and will be used in the more immediate future to improve and modernize public transit services. Our long-term plan for those funds is focused on creating connectivity, extending roadway capacities, multimodal improvements and improving transportation facilities and service.”

Invest: also spoke with Gregory Stuart, executive director of Broward MPO, about the near-term changes that could be expected from the revenues collected from the tax. “Realistically, the immediate changes aren’t going to result in construction; we are focusing on enhancing the traffic signalization program. This includes a coordination between the traffic lights, people’s vehicles and installing smart communication equipment. Another immediate change that has happened already but which we’re not going to notice for about another year, is the county transit agency’s purchase of another 130 buses. Considering they are operating a fleet of about 300 buses right now, this is a one-third expansion and a significant increase in the bus system,” he told Invest:.

While the tax is going to be a huge benefit for transportation in the region, a change in mindset is another factor impacting how people get around. One option is the Tri-Rail, which is celebrating its 30th year servicing the South Florida community. Tri-Rail Executive Director Steven Abrams spoke about how it is benefiting from the changing mindset toward mass transit in the area. “South Florida is a tourist and service-related economy, and these individuals, like waiters or construction workers, cannot work from their homes. We have people coming from all over the world who are used to rail transportation in their countries, and they are feeding into our system. Our roads are also just becoming so congested. It used to be that our ridership would principally, and almost exclusively, fluctuate with gas prices, but now that  gas prices are stable and dropping, we still have people riding our system because ultimately it is the overabundance of cars on the road that is urging them to seek alternative transportation.”

Abrams also spoke to how Tri-Rail has improved and updated its operations over the years to encourage use by a larger population. “Over those 30 years, we have improved our service, added more trains, added weekend and holiday service and added connections to the three airports. We are a transportation system that has become popular over time and we have really embedded ourselves in the tri-county area.”

The other popular train in South Florida is also the newest mass transit option for the region, Virgin Trains USA. Running through the three counties of Miami-Dade, Broward and Palm Beach, the train is looking toward the future by connecting the three counties with Orlando and an eventual Tampa Bay stop as well.

Patrick Goddard, president for Virgin Trains USA, discussed with Invest: how it wants to be a catalyst for transit change in South Florida. “We are reinventing train travel in America, so there are always going to be challenges, but none that we have not been able to overcome so far. The advent of this project has awakened a desire and a curiosity within the municipalities to recognize the full potential for mass transit in South Florida. We are solving the challenge in Florida of medium-haul travel. Airlines take care of long trips, while rideshare, motorized scooters and buses take care of short ones. There has always been this gap with the 200- to 300-mile distances that are too short to fly and too long to drive. By introducing an option like this, it encourages people to leave their cars at home and start using a more environmentally sustainable means of transit.”

A key factor in remaining economically sustainable is having good transportation and mass transit options. As Broward County continues to develop into an economic powerhouse so to must its transportation, and with changing mindsets and push from community leaders the future looks bright.