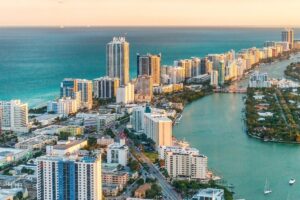 2 min read September 2021 — Miami has emerged as a top destination for those wanting to set roots in a city that has thrived in the aftermath of the pandemic. As more people relocate to the region, Miami is quickly transforming from a seasonal destination to a permanent residence for a new generation.

Compared to 2020, the number of potential homebuyers looking for properties in Miami has tripled this year, making it the most sought-after market nationwide according to the real estate website and brokerage firm Redfin.com. The same analysis also concluded that New York and San Francisco continue to be the places where the most searches for residential properties in Miami originate from.

Traditionally, Miami has been a popular market for those looking to purchase a part-time or vacation home, yet real estate experts agree that the latest influx of residents is primarily composed of young professionals that are fully aware of the comparative advantages of settling in South Florida.

“The second largest contingency of buyers in the South Florida market are those who have benefited from their companies remaining virtual or have adapted to long term flexible work structures, i.e. young professionals from Boston and New York. These buyers have found the Miami market a much more attractive home base due to its perks,” Antonio Khoury, managing director at Compass and principal of the Antonio Khoury Group, told Forbes.

Since 2017, the nature of relocations to Miami were beginning to change from seasonal residency to a permanent change in domicile, in large part due to favorable tax regulations in the state. A benefit that only became more desirable during the pandemic. “With the influx of people from high tax states, one of the tax consulting services that has gained prominence since is domicile planning. It has been top of mind with clients and prospects since it relates to establishing residency in the state,” Barry Gould, partner in charge of the Florida Offices for EisnerAmper, told Invest: in 2020.

According to the Miami Association of Realtors (MIAMI) and multiple listing services, July 2021 was a record best for real estate sales in Miami-Dade County’s history. In addition to the positive numbers, the reduced number of distressed sales showed signs of a healthy market. Between bank-owned properties and short sales, the total residential distressed sales amounted to just 1.3% in July 2021, a substantial reduction compared to the 3.9% during the same month in 2020.