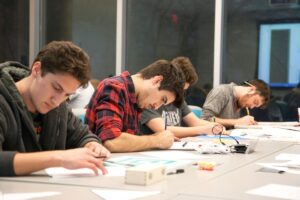 2 min read June 2021 — Pennsylvania’s higher education sector is struggling for revenues, a reality that was exacerbated by the pandemic. For some, merger opportunities may be the best path forward.

Pennsylvania’s State System of Higher Education (PASSHE) is a perfect example of the state’s challenged higher ed industry. PASSHE reported that over the past 10 years it saw enrollment drop 21%, while its average net price of attendance increased 62.4% from the 2009-2010 academic year to the 2018-2019 academic year. For FY 2020, the system’s revenues were down $113 million.

To survive, PASSHE is merging six of its universities into two powerhouse institutions. The merging of Bloomsburg, Lock Haven, and Mansfield are proposed in a consolidation of the system’s northeast institutions, while the merging of California, Clarion, and Edinboro will bring consolidation to the west. Both integrations have the goal of, “developing a single, integrated university that provides high-quality, affordable postsecondary education at three partner campuses.”

Of course, PASSHE universities aren’t the only ones pursuing such merger opportunities.

Delaware State University (DSU) recently completed the acquisition of Wesley College. “My intention is to grow our institution to about 10,000 folks over the next couple years, and this is a jump-start to that opportunity,” Tony Allen, president of DSU, told the Philadelphia Business Journal. “There is real, and I do mean real, opportunity for us to grow the organization and to do that smartly.”

Iona College also has plans to acquire Concordia College. In a Philadelphia Business Journal story, Seamus Carey, provost of Iona College, explained how these plans came to be. “In the beginning, we were two schools in close proximity with similar missions and a similar student body. I got together with their president and we were talking about ways of collaborating and synergies across the schools. As the conversations proceeded, it became clear that Concordia was probably not going to make it through and survive as its own institution. So, that’s how the conversation evolved.”

A $2.5 million fund has even been created to inspire colleges to pursue mergers and partnerships. John MacIntosh explained how this fund has been in the works and needed for a long time, “We were ready to launch this fund about 18 months ago. The reason to launch this fund is not because of COVID. I think COVID was the straw that broke the camel’s back but the rationale for this fund well predates COVID.” MacIntosh further explained the persistence of the problems that are driving such radical change in the industry. “The underlying issues have been around for a long time and will continue for a long time.”

Of course, the integration of these institutions not only helps ensure survival but they also contribute to improving educational services for students. “This is historic,” stated PASSHE Chancellor Daniel Greenstein with regard to the integration of the system’s institutions. “This can profoundly support students by giving them access to academic programming and other activities across three campuses, more than a single campus can offer. And if successful, it will mean serving these regional economies deeper into the 21st century by maintaining and expanding quality, affordable higher education.”