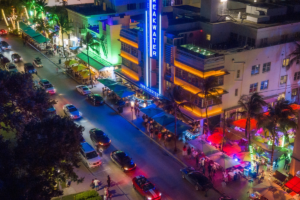 2 min read June 2021— This year’s Memorial Day Weekend was anticipated to be a return to normalcy. Fuelled by vaccinations and declining case numbers, tourists flocked to South Florida and the Magic City to experience the sunshine, beaches, and nightlife that make Miami famous. Memorial Day Weekend demonstrated the growth and success that Miami had experienced since the onset of the pandemic as well as some of the all-too familiar pains associated with large crowds and late nights.

Miami International Airport, in the days leading up to the long weekend, finally saw itself reach the same number of passengers it had that same day in 2019, with just under 121,000 travelers passing through its terminals on the Sunday leading up to the long weekend and just over 119,000 passengers the same day in 2019, said spokesperson Greg Chin in a statement to the South Florida Business Journal.

After an unruly spring break, Miami Beach saw itself better prepared for this long weekend. Miami Beach City Mayor Dan Gelber had stern words, as well as an increased police presence, in advance of the weekend. “Don’t come here if you’re looking to do something that’s stupid or illegal,” he said in a statement to WSVN. “We’re arresting almost everyone who commits these offenses.”

The city hosted the Hyundai Air & Sea Show over the weekend, which saw a variety of aircraft fly-bys and precision team-exercises, from the state-of-the-art F-35 Lightning II to the civilian P-51 Red Tails division, as well as extreme water-sports, a flyboard demonstration and jet-ski freestyles.

Bringing Miami-Dade County back to pre-covid levels of activity and tourism has been a concerted effort by a variety of parties, explained president and CEO William Talbert III of the Greater Miami Convention and Visitors Bureau (GMCVB) in a Miami-Herald op-ed. Part of the successful return of travel and tourism to Miami is in-part due to the resumption of in-person trade, business, and lifestyle events, he wrote. More promisingly, data available to GMCVB suggests that Miami is quickly returning to 2019 levels of tourism, with the average daily rates for hotels already passing 2019 figures, and occupancy expected to be on-par with 2019 by July of this year.

But the success for travel, tourism, and business in Miami over the weekend was also marked by challenges as over 30 people were injured in multiple shootings across the county. The violence began with a drive-by shooting on Thursday resulting in three people injured. Friday saw another incident injuring 7 people in the city’s popular Wynwood neighborhood, and Saturday night saw three people shoot into a crowd at a Northwest Miami Dade banquet hall. On Monday, county Mayor Daniella Levine Cava promised to bring the perpetrators of the various crimes to justice.

As part of the commitment to curbing gun violence in the community, Levine Cava said the county will be investing in Project Green Light, placing cameras in high-crime areas. She stated the project had proven itself successful in Detroit.

“I want to emphasize that we’re investing more resources in the proposed Peace and Prosperity plan into the crime, into the intelligence analysts that are important for predicting and finding out things ahead of time,” she said.

Photo by wes lewis on Unsplash