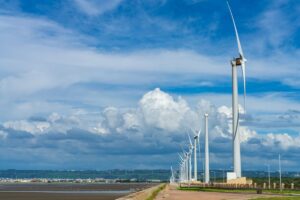 The Port is one of the many avenues the governor is using to achieve his plan to have 100% clean energy use by 2050.  “What we’re doing here today is not only going to create good jobs overwhelmingly — good union jobs — but it’s going to be perhaps our greatest stand against climate change,” said Murphy to AP News. According to NPR, it is estimated by the Economic Development Authority that the project is set to create 1,500 new jobs and generate $500 million in economic activity for New Jersey.

The Port is estimated to cost between $300 to $400 million and will sit along 200 acres beside the Delaware River. Its primary function will be to manufacture, store and transport wind turbines and their components. As New Jersey keeps approving and building new windmill plants along the New Jersey shoreline, it is crucial to have a manufacturing facility within the state as windmill engines and blades are of massive proportions and challenging to move by land. A second facility is also set to be built in Paulsboro and will be designated for building the poles that support the turbines; the former ones will float downstream to the Wind Port for assembling.

New Jersey has several wind power projects, such as Ocean Winds I and II and Atlantic Shores, which have already committed to using the Wind Port’s facilities for the turbine assembly.  This project will place New Jersey in a privileged position to capitalize on wind power projects undertaken by other states along the East Coast, estimates the office of Gov. Murphy. “The New Jersey Wind Port will create thousands of high-quality jobs, bring millions of investment dollars to our state, and establish New Jersey as the national capital of offshore wind,” said Murphy in a press release.

NPR reports that the wind power industry in the United States is yet to take off, and New Jersey wants to lead the way. The 2022 fiscal budget of New Jersey includes $200 million solely for the New Jersey Wind Port, $13 million more will come from the Board of Public Utilities and $44 million from the New Jersey Department of Transportation.

The New Jersey Wind Port is set to finish construction by 2023, according to AP News. If there are no delays, the private Danish firm Ørsted, which will build and operate Ocean Winds I and II, will start generating 1.1 gigawatts beginning in 2024. According to a University of Delaware study, by 2026, 12  wind farms located on the East Coast will produce 8 gigawatts of electricity. However, this amount, according to the survey quoted by NPR, won’t be enough. With ongoing trends such as the electrification of transportation and increase in population, the U.S. will need more energy sources. Under Biden’s administration, New Jersey can expect more support for its clean energy endeavors.