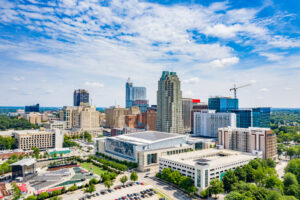 2 min read March 2021 — Challenging the Raleigh-Durham staple grocery chains is a daunting task for newcomers to the market. With Walmart, Food Lion and Harris Teeter dominating the segment in 2020, new grocery store names are rolling in with the intent to disrupt the status quo.

Among those looking to cut through the Triangle noise is Farmstead. The online grocer started delivering groceries from its north Raleigh space on March 24. CEO and Co-Founder of Farmstead Pradeep Elankumaran said that with the low level cost of delivery within a 50-mile radius, having warehouses between 15,000 and 30,000 square feet will be cost-effective, profitable and practical in the competitive Triangle market.

“We’ve had strong interest and availability in these spaces,” Elankumaran said to Triangle Business Journal. “Given that we are an online-focused enterprise that doesn’t require a lot of buildout, we can open locations in a very nimble way without spending too much money. Landlords find us to be quite attractive tenants.”

He also suggested that Raleigh-Durham’s focus on technology and food waste prevention makes Farmstead even more appealing. Flexibility, especially in the mode of doing grocery shopping amid the COVID-19 pandemic, is a huge draw.

“We are both a grocer and technology company, so we hold inventory in our locations,” Elankumaran said. “We make sure the right inventory is available for customers to buy so there is not so much food waste. We have our own employees picking and packing and delivering to you. Our job is to help you have a flexible experience while ensuring the right products are showing up at your door.”

While Farmstead’s team is full of optimism for penetrating the market, Wegmans has dropped its plans for a new location in Cary. Though its first opening in Cary in 2016 sparked excitement for many fans of the New York chain, finding its footing for widespread expansion in North Carolina proved easier said than done. Walmart has above 20% of the market share in the Triangle, Harris Teeter has 21% of the market share in greater Raleigh, and Food Lion holds more than 15% of the Triangle share. With only three stores in North Carolina under its belt, Wegmans is in a more jeopardized position.

“There remains generational loyalty to various regional grocery banners, whose performance during yet another crisis over the past year demonstrates how they are pillars of our local communities,” said Scott Moses, managing director and head of Grocery, Pharmacy & Restaurants Investment Banking at PJ Solomon, said to the Raleigh News and Observer.

Out of state stores are still attempting to solidify their North Carolina presence despite. German chain Aldi has 14 North Carolina locations and Lidl has six locations; however, this still only makes up 2% of the Triangle market share.

With the number of grocery stores entering or expanding in the market, this year is sure to be an innovative and intriguing time for the industry and the market.