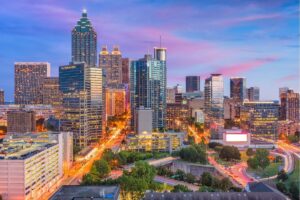 2 min read March 2022  —  Georgia is well on its way to a full recovery from the pandemic, with the success of its largest city, Atlanta, leading the way. The fast rebound is spurring high expectations for the region’s future.

All of this is feeding into the state of Georgia’s recovery. “Despite waves of infection, shortages of workers, and other supply constraints, we’ve made tremendous progress in terms of getting back to normal,” said Benjamin C. Ayers, dean of the Terry College of Business at University of Georgia, at the 2022 Georgia Economic Outlook event in December.

At a local level, helping to foster recovery in Atlanta was the city’s 2021 Recovery Plan, which included approximately $171 million directed to address recovery of Atlanta’s services, community members and small businesses. The budget prioritized COVID relief for businesses, affordable housing, food insecurity and grants for public safety and violence prevention.

Ayers mentioned that Georgia’s overall employment rate is expected to fall below pre-pandemic levels during 2022, which is approximately 1% lower than the national unemployment rate. Increases in employment are expected in industries such as hospitality, transportation and personal services, which have all been heavily impacted by the pandemic. In addition, Georgia residents should expect an increase in personal income by 1.9%, versus the projected national increase of 0.6%.

Companies such as Fifth Third Bank have also been helping to rejuvenate Black-owned businesses through various initiatives and donations to nonprofits. Fifth Third Bank announced in October a $20 million gift to Grove Park Foundation, a nonprofit organization that aims to  improve the neighborhood of Grove Park, which is a predominantly Black community. This is the largest single corporate donation the nonprofit has ever received and since then, it has been used to provide financial literacy, expansion and affordability for the community’s residents.

However, even with these great expectations for the economy, many businesses are still pushing for recovery. In a letter to President Joe Biden by the independent Restaurant Coalition, several restaurants, diners and vendors have asked for additional relief aid from the government. This national organization uses their outreach to help local regions and areas, allowing cities like Atlanta to benefit from their national credibility. Although more than 100,000 restaurants and bars received funds from the Restaurant Revitalization Fund (RRF) in the American Rescue Plan, nearly 200,000 eligible businesses that applied did not receive funding. In January, an analysis by the IRC predicted the danger for four out of five businesses that did not receive funding filing for bankruptcy, leaving behind several businesses in this ongoing recovery.