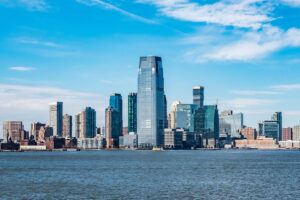 4 min read July 2021 — New Jersey’s business community is recovering from the COVID-induced slowdown but the pandemic also laid bare the inequities in the rebound, said Gov. Phil Murphy in an interview with Invest:. “It’s a mixed picture; I’d be lying if I said otherwise,” Murphy said.

Murphy pointed to record revenues for the state’s three main economic drivers during the 2020-2021 fiscal year: the corporate business tax, income tax and sales tax, adding that high propensity business applications — those for new businesses that are likely to have employees — have surged in New Jersey to one of the fastest rates of new business creation in the region.

“New Jersey is on pace to generate 50,000 new high-propensity businesses in 2021, which is up approximately 40% from the pace seen pre-pandemic. On this level, you can say folks are doing just fine.”

However, on the other side of this business growth lies problems with inequity. “The problem is that the pandemic has laid inequities bare. During this pandemic, we’ve had 2 million initial claims for unemployment insurance, and estimates indicate 30% of our small businesses have gone bust,” Murphy added during the interview in early July.

Despite the ongoing recovery, the business community still has immense obstacles to overcome. One of the key issues with economic rebound that business leaders have identified to Invest: is the inability to properly staff businesses to meet demand. While many leaders point to additional unemployment compensation as being the primary culprit, Murphy says the pandemic continues to play a significant role in the labor shortage.

“Some people blame the $300 premium on unemployment for the labor shortage and that may be a contributing factor, but there are a lot of people who are suffering and need that money. Lack of daycare, schools not being full-time and fears about being back in the workplace are all issues,” said Murphy.

Although it has been well over a year since the onset of the pandemic, it is evident that COVID continues to have a significant impact on local communities. The Delta variant is spreading and unvaccinated individuals are at risk. “If you look at who’s in the hospital, in the ICU, or more sadly, who’s passing away, they’re unvaccinated people. This is increasingly a pandemic of unvaccinated persons and I plead with people to get vaccinated,” said Murphy.

The state is approaching 5 million fully-vaccinated New Jerseyans but there are millions of individuals who remain unvaccinated.

In an effort to combat the difficulties that people and businesses face today, Murphy and his administration passed a historic budget for FY2022. “We have all-time record investments in our state in public education, public health and infrastructure,” said Murphy.

Among the targeted spending projects in South Jersey are the Walter Rand Transportation Center redevelopment in Camden and funding for three level-one trauma hospitals, with Cooper Medical Center among them.

“We also have not one but two large port infrastructure projects in New Jersey to support the offshore wind industry. If you add these four investments together, it’s well over a billion dollars in infrastructure,” Murphy said.

Despite this significant spending, with over a billion dollars going to South Jersey alone, the state’s budget is balanced. Overall, New Jersey’s financial position improved: after the budget announcement, Moody’s upgraded the outlook for New Jersey’s general obligation bonds from stable to positive.

Speaking specifically to South Jersey, Murphy highlighted the push for renewable energy and the offshore wind development taking shape in the region.

“I would underscore in particular the offshore wind economy and its potential; it’s enormous for South Jersey. All the offshore projects, as well as the two ports and manufacturing facilities, will be 100% located in South Jersey. This industry will bring thousands of good-paying jobs and clean energy that respects commercial fishing and homes on the shore,” said Murphy.