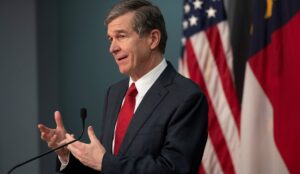 2 min read March 2020 — Could a more than $55 billion budget over the next two years help the Tar Heel state not only recover from the pandemic but also position North Carolina for long-term success in a post-COVID future? North Carolina Gov. Roy Cooper believes so.

Cooper last week proposed a biennium budget that prioritizes education and workforce training, COVID-19 recovery, as well as infrastructure and healthcare demands exacerbated by the pandemic. The governor’s proposed budget calls for the state to spend $27.4 billion in fiscal year 2022 and $28.5 billion in fiscal year 2023, prioritizing key investment areas without raising taxes, his office reported

“With the right priorities, we will not only beat this pandemic, but build lasting success for North Carolina,” Cooper said in a press release. “The most important recommendations today will invest in North Carolina’s people so they can learn, get healthier, and get the right kind of training for great jobs.”

K-12 teachers would receive raises of 10% on average over the next two years and ensure that all non-certified school personnel receive a minimum of $15 an hour, the governor’s office reported. Another $78 million for early education and child development and $80 million to help school districts support staff such as nurses, counselors, psychologists and social workers are key components of the education portion of the budget, the governor’s office reported.

“This budget also works to make good on our state’s constitutional duty to make sure every child has access to a sound basic education,” Cooper said. “We know how to do that: attract and keep good teachers with competitive pay and recruit young people to make teaching a career. Make sure students and adults are ready for careers in high demand fields of employment. Provide the right resources for students with the greatest needs.”

Given the pandemic’s exacerbation of healthcare needs across the state, increasing access to quality healthcare is a major part of the governor’s vision for recovery and long-term success.

Among the healthcare-related priorities, the budget is targeted to provide access to healthcare for more than 600,000 working North Carolinians, bolster rural hospitals across the state, reduce the number of uninsured veterans, continue fighting the opioid epidemic, and inject more than $5 billion in direct investment into the state by expanding Medicaid.

“We must get healthcare to more working people and the best way to do that is to expand Medicaid,” Cooper said. “I am ready to work with legislative leadership and members of both political parties here in North Carolina to find a way forward.”

The governor’s budget piqued concerns from state Republicans who are weary of overspending and borrowing. “We have concerns about the very high spending growth and billions in borrowing in Gov. Cooper’s proposed budget,” said Sen. Brent Jackson, R-Sampson, according to ABC 11. “We don’t want to return to an era of rollercoaster-style budgets with huge spikes in the boom years followed by huge cuts in the lean years.”

Jackson was especially critical of some of the educational components within the budget, namely a potential elimination of the state’s Opportunity Scholarship program.

“Gov. Cooper also wants to eliminate the Opportunity Scholarship program,” Jackson said, ABC 11 reported. “His plan would harm working parents who desperately want their children to have an education that best prepares them for success. The program is enormously popular, especially among lower-income and non-white communities. For all the left’s talk about ‘equity,’ taking money away from low-income children so a private education is only available to the elite seems hypocritical.”

The governor’s proposed budget will now head to the General Assembly for consideration. The new fiscal year begins July 1.