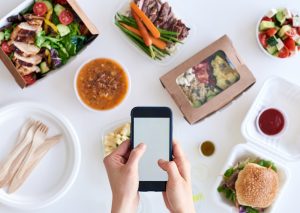 2 min read August 2020  — The digital age means consumers can enjoy a restaurant experience without leaving the comfort of their own home. Even before COVID-19, people appreciated the convenience of having their food delivered. An estimated 44 million Americans use food carrier apps like UberEats and GrubHub every year, according to EMarketer. To feed the demand for more food delivery options, ghost kitchens, also known as virtual restaurants, have started to emerge.

Ghost kitchens are similar to traditional restaurants except for the fact that they don’t technically have an official location. Cloud kitchens can be established almost anywhere that has running water and electricity. Warehouses, food trucks or other large commercial spaces are typically the most popular locations for virtual restaurants to set up shop.

Establishing a virtual eatery has become a lucrative business for not only inspiring restaurant owners but for real estate investors as well. Early this year, Simon Property Group partnered with SBE Entertainment Group to develop around 200 ghost kitchens in vacant retail spaces, according to The Wall Street Journal. Once furnished with proper kitchen equipment, spaces can be leased out to chefs and small-business owners to make their culinary dreams a reality.

“We expect in the current pandemic we’ll see more of this repurposing; real estate operators doing anything they can to drive revenue from their existing properties. Likewise, we’re going to see a lot of new operators looking to fill the void with cheaper concepts … more delivery-friendly concepts that require less capital up front,” Michael Schaefer, global lead for food and beverage at Euromonitor International, told Restaurant Dive.

Real estate developers using large abandoned buildings offer all parties involved a chance to make money. Not having a traditional brick and mortar location saves restaurant owners thousands of dollars in rent each month. “It could literally be a third or less of what you might otherwise be paying with a traditional lease. These kitchens are not just for you; there are other people using them, so the costs are spread for the owner,” Herman R. Lipkis, a Fort Lauderdale-based attorney for Holland & Knight LLP, told RestaurantOwner.

For one ghost kitchen, having the option to save money on rent gave its owner the leg up he needed to launch a physical version of his virtual brand off of N. Federal Highway in Fort Lauderdale.

Brian Peter, a virtual restaurateur, originally owned and operated a traditional restaurant. However, low sales and even lower profit margins left him no other option but to close his doors. Fortunately for Peter he was able to pivot and shift his focus to delivery. Doing so, he was able to become profitable enough to launch his virtual brand, Wicked Cheesesteaks, Pizza and Wings, into a physical sit-down restaurant. “After trying and trying, we finally arrived … All the food is still on food-delivery apps but now we have a true brick-and-mortar,” Peter told the Sun Sentinel.

Even though the pandemic is taking a heavy toll on the hospitality industry, physical restaurants don’t seem to be going anywhere anytime soon. Nevertheless, ghost kitchens and food delivery apps are the hottests trends in the food industry. As the world continues to evolve digitally so does the typical restaurant experience. “In the future, a more robust ghost kitchen market could also usher in advanced restaurant automation,” Schaefer told Restaurant Dive. “In five to 10 years, this shift could translate to full automation for the production of certain menu items, like pizza, ramen or high-end coffee, to drive speed of service and lower food production costs.”