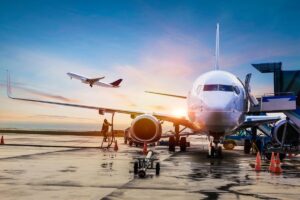 2 min read December 2021 — The acquisition of Florida-based Spirit Airlines by Denver-based Frontier would make the combined airline the largest operator out of the Orlando International Airport, bumping Southwest off the No. 1 spot, and potentially opening new routes and opportunities for Orlando-based flyers looking for low-cost travel options.

If permitted by federal authorities, the $2.9 billion cash and stocks deal announced Monday would also make the Frontier-Spirit combined airline the fifth largest in the United States (currently, Spirit is ranked No. 8 and Frontier is ranked No. 9), according to the Orlando Sentinel.

Already, both airlines had been expanding services and base operations out of Orlando, with Frontier Airlines adding new domestic and international routes out of the airport in November 2021, and Spirit naming Orlando its hub for new Caribbean expansions, the Orlando Business Journal reports. The combined company would add further new routes to Latin America and the Caribbean — a target market for expansion, according to company announcements.

And the Greater Orlando Aviation Authority is preparing for growth — it is already in the process of completing the South Terminal project, a nearly $3 billion project focused on increasing the number of gates at the airport and to make the airport intermodal, Phillip Brown, CEO of the Greater Orlando Aviation Authority, told Invest in an interview.

“At the height of the pandemic, we made the difficult decision to reduce this $3.1 billion project by $260 million or so because we didn’t know if we would get the revenue to fund the contracts. We knew after the vaccinations rolled out that we would have a sufficient rebound in demand for the facilities, so we identified state and federal funds to add those projects back,” Brown said. “In October, we gained approval from the Department of Transportation for a $15 million grant. Half of that will go toward the ground transportation facility corridor.”

Brown said the Aviation Authority is expecting travel to recover to pre-pandemic levels in 2023, given the uptake in traffic and vaccine rollouts.

“Our No. 1 challenge is to ensure we’re able to accommodate the airlines, which is why we’re pushing to complete the South Terminal projects,” Brown said.

In the Spirit/Frontier merger, the companies have valued the deal at $6.6 billion and say such a move will allow the low-cost airline to better compete in routes and deals with the likes of American Airlines, Delta United and JetBlue. The deal will also enable the new company to grow faster, Frontier and Spirit officials said, announcing they will be able to add new low-cost services to underserved routes throughout the United States, Latin America and the Caribbean. They also plan to hire another 10,000 workers by 2026 if the deal goes through, the Wall Street Journal reports.

“This transaction is centered around creating an aggressive ultra-low fare competitor to serve our guests even better, expand career opportunities for our team members and increase competitive pressure, resulting in more consumer-friendly fares for the flying public,” said Spirit President and CEO Ted Christie in a statement.

The merger, expected to close in the second half of 2022 pending a federal review process and approval by Spirit Stockholders, will see Frontier stockholders holding about 51.5 percent of the combined airlines and Spirit shareholders at about 48.5 percent.

Another low-cost airline, Avelo Airlines, has also started operating out of the airport, with Brown saying it recently inaugurated a flight from Tweed New Haven Airport, further opening the New England market.

“Central Florida is really poised for growth because we offer a variety of experiences, from theme parks to natural beauty, that help us to attract travelers. We have a great environment, which is attractive to people who have been cooped up and want to get out,” said Brown.