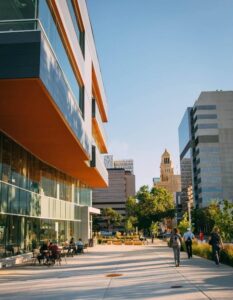 2 min read January 2022— As individuals across the country reassess their priorities and living situations, the city of Rochester, Minnesota, provides an enticing opportunity for new residents and businesses alike.

Located along the rolling hills of southern Minnesota , with the Zumbro river snaking through the city, Rochester has grown incredibly since its humble origins as a stagecoach stop on the Dubuque trail up to St. Paul. Boasting the largest population in Minnesota outside of the Minneapolis-St. Paul-Bloomington Metropolitan Statistical Area, with over 121,395 residents in the city and a total population of 226,329 across the metro area, Rochester is also home to the world-famous Mayo Clinic and a deep bench of industry heavy-hitters, including Google, IBM, Boston Scientific and Epic.

As global headquarters for the Mayo Clinic, Rochester has proved itself to be a hub of innovation. Destination Medical Center (DMC), one of the key economic development arms for the city and founded to take a proactive approach to the city’s growth, has long noted the advantages of the Mayo Clinic and the ancillary benefits provided to other businesses. “Many of the large corporations that are now operating in Rochester are doing so because of the proximity and access to the Mayo Clinic ecosystem,” Executive Director Patrick Seeb told Invest: in a statement. “They see and realize the advantage of being in the same space as the leading hospital in the world.”

The city marks the southern terminus of Medical Alley, the corridor that stretches from Rochester to Duluth and where over 1,000 companies, including 3M, Ecolab and Medtronic, encompassing the entire spectrum of healthcare, are located. Rochester provides more than just hospital space, however, and is itself a strong platform for a number of different industries and vendors looking to capitalize on the well-established healthcare presence in the city. “Just as those companies mentioned above offer complementary services to what Mayo provides, small businesses can offer complementary services to each of those larger corporations. That’s the part of the entrepreneurial spirit that is being fostered in Rochester. And, of course, those larger businesses have employees who have interests and needs outside their working space. This brings opportunities for diverse, ancillary businesses (food, recreation, health, hobbies) to grow as more people move to the Rochester market,” added Seeb.

With wide avenues and sidewalks, businesses big and small, as well as strong recreational offerings, Rochester provides big-city opportunity while cultivating the quintessential small-town sense of community. Nestled between St. Mary’s Hospital and the Mayo Clinic Hospital are urban family-friendly neighborhoods along Kutzy Park, Pill Hill and Historic Southwest. Only a few blocks and a short walk away lies the heart of Downtown Rochester, where pedestrians can follow any of the city’s numerous trails or sit by open public spaces and gardens along the river before emerging along the Mayo Civic Center and Rochester Art Center. East past the river is the residential neighborhood of Slattery Park and beyond lies Rochester Community and Technical College, with a robust offering of programs from Healthcare to Liberal Arts, Computer Science, Law Enforcement and Agricultural Science.

The focus on and cultivation of the sense of community are integral elements to the city’s development and investments. “We have a triple bottom-line approach to our public infrastructure investments,” Seeb said. “For example, being intentional about creating public spaces that generate a sense of welcoming and inclusiveness for all members of the community. Or investing in transit infrastructure that becomes a catalyst for affordable housing. Or construction techniques that reduce carbon footprint.”

Projects are designed and developed with equity in mind, with contracts awarded to local and minority-owned businesses with the aim of developing a more vibrant and economically diverse city. “We have set and met goals for increasing the number of women and minority-owned business enterprises (WMBEs) that are awarded construction and professional services contracts associated with DMC projects.” Seeb said.

The projects themselves have already begun to draw headlines for the city, with Discovery Square a key example of how Rochester and DMC look to capitalize on migration and workforce trends to catapult the city into the next century. In an earlier conversation with Invest:, Seeb described the live-work-play project, which includes a designated innovation district around the physical development as something more than just typical office and retail space.

“But more than just office spaces and labs, the district offers contemporary living spaces, new restaurants and public spaces, all designed to stimulate interaction between Mayo Clinic scientists, industry experts and students. Someone used the phrase ‘orchestrated serendipity’ when describing the idea behind Discovery Square. He was imagining the power of Mayo Clinic’s ‘bench to bedside’ philosophy (from the laboratory to clinical setting) coupled with the private sector’s strength in commercialization, marketing, manufacturing and distribution.”

The focus on retail and local commercial businesses will be key to the city’s continued growth and vibrancy. Christopher Schad, Director of Business Development for DMC, detailed the focus of the organization as individuals continue to reassess where they live and how they work: “One of the areas we will be putting our focus is on retail retention and recruitment strategies. We partnered with the Rochester Downtown Alliance on a residential research study of the Downtown area. The 2020 Census showed that Downtown Rochester’s population grew at a faster rate than any other area in our community. We wanted to find out who these people were and what their interests were in order to inform current and potential retailers of this growing customer base.”

The emphasis on retail and commercial development comes as Rochester’s growth shows no signs of slowing. Figures from DMC show the city attracted 3.2 million visitors a year, which provides a strong base of potential workers and patrons for both the healthcare sector and the businesses that have noticed the opportunity Rochester presents; notably, to establish the city as the premier destination when it comes not just to healthcare but associated industries, whether that be in the medtech and technology or biotech and life science fields, or even as a cultural hub where, “people want to bring their favorite parts of home with them,” said Seeb,  recounting the city’s first Night Markets in Rochester’s downtown. “Local artist Tiffany Alexandria wanted to bring a favorite social event from Asia to Rochester with a focus on Asian and BIPOC vendors. There was food, pop-up art displays, entertainment – similar to what you would see in night markets throughout Asia.”

Seeb is bullish on what the future holds, banking on the city’s ability to capture the ongoing changes happening throughout the country. “We go into 2022 with a belief that the pandemic has permanently altered the economy by virtue of how it has impacted human behavior and technology.” That change heralds opportunity for the future of the city and the mantle it claims. For new residents and relocating businesses alike, “Welcome to Med City, USA.”