From Huntersville to Pineville, Mecklenburg County is ready for greater growth

From Huntersville to Pineville, Mecklenburg County is ready for greater growth 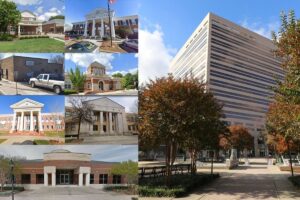 December 2021 — While the city of Charlotte has emerged as one of the strongest players in what is slowly becoming a post-pandemic economy, a robust Mecklenburg County region will be key to solidifying widespread and continued growth.

Even as some challenges remain, Mecklenburg County has made great strides in positioning itself for future growth. Neighboring communities such as Huntersville, Pineville and Matthews are all home to strong industries that are expected to continue to grow, from well-known food and beverage chains to niche advanced manufacturing firms.

The dynamic mix of industries is also reflected in the population growth the County has experienced. From 2010 to 2020, Mecklenburg County’s population grew 21.3%, to 1,115,482,  just behind Wake County, which is much bigger in land size, covering 857 square miles to Mecklenburg’s 546. Charlotte itself was one of the few U.S. cities, alongside the likes of Austin and Seattle, to grow its population over 100,000 throughout the last decade, which totals at 874,579 residents, up 19.6%.

“We always make a point of leveraging our assets. Mecklenburg County offers great quality of life and green spaces. We continue to enhance these assets with significant investments in our parks system and expanding our greenway system. We are working closely with our economic development partners to put together incentive packages that are competitive with our neighbors. We want to work as a region to create synergies for corporate attraction and retention that benefits all stakeholders involved,” Mecklenburg County Manager Dena R. Diorio told Invest:, earlier in 2021.

Companies have taken note of the work underway, with both local and multinational firms finding a home in Mecklenburg County. In the advanced manufacturing space, organizations such as Burkert Fluid Systems, Pester Pac USA, and Stiwa have located their headquarters in Huntersville or began their story in Matthews. Burkert is one of the world’s leading manufacturers of measuring and controlling systems for fluids and gases. Stiwa provides comprehensive automation solutions for a variety of industries. Other companies in the advanced manufacturing space include Groninger USA, which manufactures parts and machinery for pharma, cosmetics and consumer healthcare needs, or Bosch Rexroth, another leader in drive and control technologies, which is based in Charlotte proper.

The strong manufacturing base found in Mecklenburg County has attracted additional businesses in the electric-vehicle (EV) sector, which in the United States outpaced the global demand between 2017 and 2018, and the global demand for EVs will amount to 58% of passenger vehicle sales by 2040, reports Forbes. Companies such as Celgard, PolyPore, and Arrival,  are already anticipating that demand. Arrival, for example, has established a microfactory to produce electric delivery vans and is expected to bring more than 250 new jobs to Charlotte and Mecklenburg County. The microfactory is expected to begin production by the third quarter of2022. Celgard and PolyPore manufacture the waterproof membranes for both lithium-ion and lead-acid batteries. The industry is expected to see strong growth as a result of President Joe Biden’s focus on a clean-energy future and as part of the trillion-dollar infrastructure bill.

Another industry that has found itself comfortable in Mecklenburg County is the print and packaging sector. The County hosts the third-largest cluster of businesses in the industry behind Louisville and Kansas City. Print and packaging businesses in the County include Kurz, Essentra, Printful, INX, and Robert’s PolyPro, with Kurz and Essentra being based in the communities of Huntersville and Pineville while the remaining three find themselves in Charlotte. The jobs created here are typified by the high demand for tradespeople, including machine operators, injection molding and researched-focused R&D jobs. To meet the demand, Central Piedmont Community College has long offered programs centered around graphic arts and imaging tech, leading to a variety of courses, from flexography to emerging print technologies.

Speaking to the diversity of industries across the County, Mecklenburg is also home to a number of well-known name brands. The biggest and most famous is the Coca-Cola Bottling Company, which is the largest independent Coca-Cola bottling company in the country, doing business in 14 states and the District of Columbia. Harris Teeter, the “neighborhood food and pharmacy” with more than 250 locations across seven states, is based in Matthews. In the Queen City, the purveyor of the famous Duchess Honey Bun, Carolina Foods, has been owned and operated by the Scarborough family for three generations. Frito Lay has had a presence in the region for several years now, and Campbell’s Soup recently bought out Snyder-Lance in a multibillion-dollar deal that saw the creation of Campbell’s new snack division, in addition to the already existing 525,000-square-foot mixing center in Pineville.

With a number of growing businesses, both large and small, combined with a strong, continually expanding population and the considerations the County has already made to accommodate the expected growth, Mecklenburg County is well on its way to capitalizing on the current conditions that have seen more people relocate to the area. With affordable living and a variety of industries that include a number of distinct sectors, Mecklenburg County finds itself in a strong position to face the future. If Charlotte is the “Queen City,” Mecklenburg County and its numerous communities are the jewels in the crown.