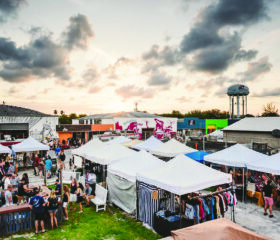 2 min read January 2021  — As some South Florida counties block events over COVID-19 concerns, Fort Lauderdale has gone the other way, but with a nod to COVID-19.

Fort Lauderale also approved the Fort Lauderdale International Boat Show and the Fort Lauderdale Air Show in the last months of 2020, which both drew large crowds with lax enforcement of masks. However, as COVID-19 cases climbed after the holiday season, the Jan. 4-5 Las Olas Art Fair was canceled after Broward County warned of a $15,000 fine for safety violations; this news came one day after event organizers received a green light from both city and county officials.

“All these artists were coming into town,” said Jodi Jeffreys-Tanner, vice president of Las Olas Association. “It was already approved by the county and the city. And they did this at the last minute. It seems very harsh. This makes me really sad. If people don’t feel safe coming out they don’t have to come out.”

In contrast, popular outdoor events denied permits by Palm Beach County include the South Florida Garlic Fest and the Jupiter Seafood Festival. The South Florida Fair in West Palm Beach, which annually attracts upward of 500,000 people, has been canceled and replaced with a “mini-fair” scheduled the original fair dates of Jan. 15-31. Only “kiddie rides” will be available in the fully outdoor event.

“Hosting a scaled back, outdoor version of our traditional fair will still allow fairgoers to enjoy a fun-filled event,” said Vicki Chouris, South Florida Fair’s president and CEO, in a report on the WPTV website. “Mini but mighty with maximum fun is what we plan to present!”

The annual television special tradition continued, however, with WSVN Channel 7 producing the Best of the Parade television special with a “Home for the Holidays” theme as “a reflection of our community’s heart and hope,” according to Lisa Scott-Founds, president and CEO of Winterfest, Inc. The program featured retrospective segments and a look forward into the 2021 50th Anniversary Winterfest Boat Parade, which organizers are optimistically anticipating.