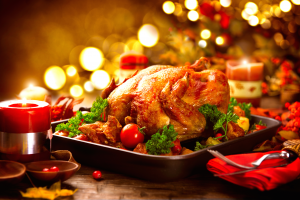 2 min read November 2019 — When we think of Thanksgiving, generally we conjure up images of hats with oversized buckles, turkey, cranberry sauce, pumpkin pie and The Mayflower. But according to historian Kathleen Deagan, research curator emerita of historical archaeology at the Florida Museum of Natural History, the first Thanksgiving was not exactly as we may imagine. Rather than taking place in Plymouth, the first Thanksgiving feast was actually celebrated in Florida.

The meal was shared by the Spanish Conquistadors and the native Timucuans, more than 50 years before the Mayflower arrived on American shores, according to historians. Don Pedro Menéndez de Avilés, a Spanish explorer and 800 soldiers and sailors landed on Florida’s shores near St. Augustine before holding the Mass of Thanksgiving.

“The holiday we celebrate today is really something that was invented in a sense,” said Deagan in an interview with the University of Florida. “By the time the Pilgrims landed at Plymouth, the people who settled America’s first colony with Menéndez probably had children and grandchildren living there.”

So instead of buckled shoes and hats, think suits of armor and 16th century Spanish garb. Instead of turkey, think salted pork, and instead of pumpkin pie, think garbanzo beans, olives and hard sea biscuits. “It was the first community act of religion and thanksgiving in the first permanent settlement in the land,” wrote University of Florida professor emeritus of history Michael Gannon in his book The Cross in the Sand.

Other sources say there were many other “Thanksgiving” ceremonies in Florida well before even Menéndez, including the landing of French explorer Rene Goulaine de Laudonnière at Jacksonville in 1564, Hernando de Soto in 1529 and Juan Ponce de León in 1513. After approximately 70 days at sea, all most likely would have had to depend on the kindness of the natives for food and shelter when they landed on American shores.

Some argue that the Plymouth mass is remembered as the first Thanksgiving because it was the first that spawned a yearly tradition. “None of these events were made anything of historically, or even rediscovered, until the 20th century, and thus did not contribute to our modern American holiday tradition,” said James W. Baker, author of Thanksgiving: The Biography of an American Holiday.

But regardless of where the first holiday was held, the true meaning behind Thanksgiving has evolved to symbolize coming together with friends and neighbors to break bread and overcome differences. There is no doubt that this tradition has immense relevance for states such as Florida, with their rich patchwork of cultures. “The fact is, the first colony was a melting pot and the cultural interactions of the many groups of people in the colony were much more like the U.S. is today than the British colonies ever were,” said Gifford Waters, historical archaeology collection manager at the Florida Museum.