Financial institutions set sights on the Triangle market for expansion

Financial institutions set sights on the Triangle market for expansion 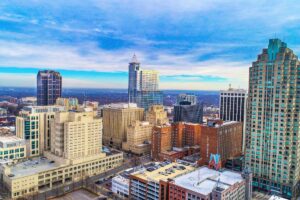 2 min read October 2021— Despite the challenges of the last 19 months, the Triangle has  remained a desirable destination for businesses looking to establish and expand their operations. As the region continues to provide these opportunities, banks and financial institutions are choosing Raleigh-Durham as a focal point to establish and grow their presence in the Southeast.

Early this year, Fifth Third Bank announced the opening of a financial center in Raleigh. Over the last 12 months the Cincinnati-based bank doubled their number of branches in the Triangle with plans to continue expanding.

“It’s one of our highest priorities in terms of areas of focus,” said Lee Fite, regional president of North Carolina for Fifth Third Bank, in an interview with the Triangle Business Journal, as he highlighted the importance of the region for the company.

Similarly, in August, Dallas-based Comerica Bank selected Raleigh as the epicenter for the company’s Southeast strategy and to serve as their headquarters in North Carolina. Previously, Comerica did not have a presence in Raleigh or North Carolina, making this a landmark step for the bank’s strategic planning moving forward.

“This is a new market for Comerica, so it’s the opportunity to help build something that’s hopefully going to be a very strategic, important marketplace for Comerica in the coming years, now and into the future,” Comerica Southeast Market President Jerry Bowen told the Triangle Business Journal.

Financial services leader Fidelity is adding another 1,538 jobs in Research Triangle Park. This expansion of its technology and customer service personnel is the company’s third, and largest, expansion in the region.

“We’ve been working with some of our community and educational partners, like Durham Tech, Wake Tech and some of the local universities, to not only find ways to recruit, but also to focus on coursework and curriculum that can help some of their students be more prepared for roles like ours, “ said Rob Merdes, general manager of Fidelity Investments.

Banking giant Truist has also recently opened new positions across the Triangle Area. In their efforts to expand the company’s presence, the bank is looking for positions in advisory, cybersecurity engineering, and banking relations.

“We all see it in the data, about people wanting to move here,” John Ward, market executive for the Wells Fargo Triangle and Eastern North Carolina said to the Triangle Business Journal. “We have a lot of employees who want to come to this market. We have a lot of experienced folks who have relocated to be a part of my team.”