Fight over affordable housing heating up in Minneapolis-St. Paul

Fight over affordable housing heating up in Minneapolis-St. Paul 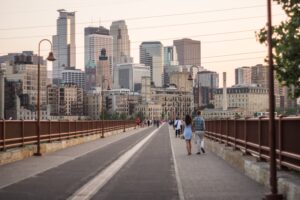 2 min read April 2021 — Alatus, a Minneapolis-based developer, is moving forward with its plans to develop an empty lot in St. Paul’s Frogtown neighborhood after the mayor’s controversial decision to veto the city council’s rejection of the proposal.

The developer hopes to build a 288-unit apartment building just off of the Green Line light rail corridor’s Lexington Station for a proposed $57 million. Opponents of the development have organized against the building, arguing that it is too expensive for the area and will price out current residents. Half of the units available would be priced at affordable rates for those that make under 40% of the area’s median income. Organizers say that is still too pricey.

A narrow majority on both the citys’ Planning Commision and the city council voted against the project, appearing to kill it right then. Mayor Melvin Carter instead vetoed the city council’s rejection of the plan, arguing that the city needed more housing at all income levels. For the parties involved in developing the project, that was enough.

“We fully intend to move forward with the project and expect to close on the land and construction financing in the near future,” said Chris Osmundson, a development director with Alatus, in an email to the Pioneer Press. The land-owning Wilder Foundation president and CEO Armando Camacho said in a brief written statement on Thursday that, “Considering the mayor’s response to the city council regarding the property, Wilder’s Board of Directors intends to continue the dialogue with Alatus and the city to understand how the development can move forward with greater levels of affordability.”

The development comes at a pivotal moment in the community as housing prices continue to rise and the real estate market remains red-hot. With inventory at its lowest level in the last 20 years and demand continuing to increase, neighboring communities in the metro area are taking their own approaches to managing the rising prices and keeping them affordable.

Edina, the Minneapolis suburb for example, has taken to partnering with Homes Within Reach, a community land trust and nonprofit that works in Minneapolis and other metropolitan suburbs to secure older housing stock in a land trust. While the houses would be sold to prospective buyers at affordable rates, the CLT maintains ownership of the land itself.

Future buyers will end up benefiting from the agreement. The median price of housing in the area is $540,000, up $100,000 from last year, while Homes Within Reach will be selling them for anywhere from $175,000 to $220,000. Members of the program will have one stipulation, which is to sell to income-restricted buyers and home-value caps. The city has already sent out thousands of mailings inviting owners of the city’s affordable housing to gauge interest in selling to the trust.

As for Alatus’ plans for the apartment complex, there are more fights ahead, as organizers say the mayor has overstepped his bounds and cannot weigh-in on zoning decisions approved by the Planning Commission. Community group Midway Rise Up! labeled the mayor a “gentrifier” and vowed to continue fighting the project, stating, “Our anger on this runs deep.”

Photo by Weston MacKinnon on Unsplash