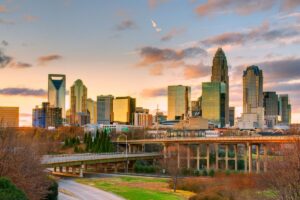 2 min read November 2021— Now that Charlotte has the money to rebuild its transportation center, just how will it spend those funds? The city last week won a $15 million grant through the Rebuilding American Infrastructure with Sustainability and Equity (RAISE) grant program.

To begin with, the new infrastructural development will replace the existing transportation center with a modern, underground concourse capable of connecting users with local bus services, a new trail for cyclists and pedestrians, LYNX Blue Line light rail, and the CityLYNX Gold Line streetcar. Eventually, once the makeover is completed, the city plans to build a vertical mixed-use development above the concourse.

The Charlotte Area Transit System (CATS), as well as Charlotte’s economic development division, were some of the local authorities in charge of writing the grant proposal and contract to receive the federal funding. Now, the City Council needs to formally accept the grant to initiate the redevelopment of Charlotte’s transportation center, a structure originally created in 1995. The resources are expected to be available by 2024 and spent by 2029.

In 2019, CATS was already looking for alternatives to finance the redevelopment of the 2.6-acre bus terminal. For that purpose, the local government agency selected White Point Partners and Dart Interests as the companies responsible for exploring the viability of the project. However, it was only with the announcement of the $15 million RAISE grant that the city finally secured the necessary funding for the new facility.

The grant received by Charlotte is part of the Biden administration’s $1.2 trillion effort to upgrade the country’s infrastructure, create new jobs, and prepare municipalities for the challenges of a post-pandemic economy.  Today, according to the North Carolina Department of Transportation, more than 3,000 miles of highways and 1,100 bridges are considered to be in poor condition across the state.

“It is a $1.2 trillion-dollar package that will have enormous benefits for the country and for North Carolina,” said Congresswoman Alma Adams during a virtual event related to the infrastructure. “This bill will strengthen our economy, secure cleaner air and water, and make our communities a better place to live and work by bringing our infrastructure into the 21st century.”

Population growth over the past 18 months has challenged Charlotte’s existing infrastructure. Besides transportation, private and public entities are pushing to expand the city’s healthcare, housing, and education coverage to meet the new demand.