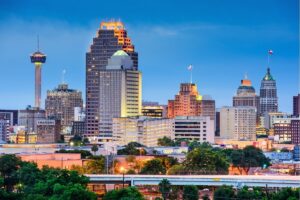 2 min read November 2021 — It’s not a secret that the San Antonio transit system could use some work, but one of the issues that has always stalled the process was funding. Now, with $260 million funneled to VIA Metropolitan Transit by the federal government to assist with COVID recovery, officials are on the clock to make some big decisions on what’s best for the region.

The Capital Improvement Grant Program is high on the list of options to revisit. It was part of VIA’s multimodal mobility plan, but has never been implemented because it requires a local funding match to implement. Now that the city has that money, the CIG could speed up the construction of San Antonio’s first advanced rapid transit system. Commonly referred to as trackless trains, a North-South route starting near the airport would launch the project, but the authority ultimately plans to extend the system to reach as far east as the AT&T Center.

The Boring Co., backed by billionaire Elon Musk, CEO of Tesla, has also been in talks with local leaders to build an underground transportation loop in San Antonio. Under The Boring Co. proposal, a fleet of company-driven Teslas would shuttle visitors between the airport and downtown. City Manager Erik Walsh, Assistant City Manager Rod Sanchez and Transportation Director Tomika Monterville have all been a part of the conversation, and according to city spokeswoman Laura Mayes, the underground shuttle is not a viable option right now. However, the Alamo Regional Mobility Authority has formally invited contractors to submit plans for an “economically viable” way to move travelers from the airport to the center city.

Texas also received a $12.2 million grant from the U.S. Commerce Department’s Economic Development Administration to boost travel, tourism and outdoor recreation. The federal grant funding will support marketing, infrastructure, workforce and other areas that can help reignite leisure, business and international travel. The federal government also announced additional state grants would be awarded in the coming weeks and months.This boost to tourism does give a little more weight to the loop proposal as it is a very popular destination for people coming into San Antonio, especially business travelers.

No matter what transportation improvements the city decides to make, communication will be key. At a recent Boerne city council meeting, residents went head to head with officials over controversial regional planning efforts. The committee had previously avoided making any public comments about the planning, but due to public interest has now promised transparency. The people are vested in the plans the transportation committee has to ease congestion and other roadway improvements. The committee is currently sorting through roughly 350 individual mobility improvement ideas recommended by area residents, and the people want their concerns addressed

“The community tells us how they want to live and it’s important that our department follows those desires, which are present in these plans,” Tomika Monterville, director of the city of San Antonio transportation department, told Invest:. “It is not our place to decide what growth looks like moving forward but it is our responsibility to foster these conversations with the community and let residents decide how they want to move forward.”