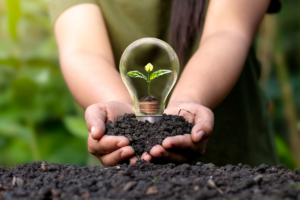 2 min read June 2021 — In Pennsylvania, temperaturesopens PDF file are projected to increase by about 5.9°F by the year 2050 and 9.4°F by 2100. While there are a great number of variables that could be contributing to this change in temperatures, it is certain that air pollution is playing a role as agreed upon by most of the scientific community. In January, Mayor Jim Kenney announced the City of Philadelphia’s commitment to achieving carbon neutrality by 2050, and both private and public entities are striving to make that goal a reality.

Although the state is devoted to clean energy and Mayor Jim Kenney has approved various green initiatives, public action alone will not make the state’s and city’s green energy goals a reality; private involvement is necessary. Such change can be extremely challenging, but major energy companies are striving to foster this change.

In late March, PECO requested approval of a $246 million increase in electric distribution rates to support significant investment in infrastructure to enhance the local electric grid and enable the advancement of clean technologies. However, if approved, the average PECO residential and business customers would see their bill increase by 9.65% and 5.49% respectively, showing how some green initiatives can bear a cost.

In an interview with Invest: Philadelphia 2021, Mike Innocenzo, president & CEO of PECO, explained the importance of such green initiatives, “As the needs and expectations of our customers and communities grow, we must continue to grow with them. A key focus of creating a greener and more sustainable region across Greater Philadelphia is renewable energy, such as solar and other resources, and the electrification of transportation.”

Philadelphia Gas Works (PGW) has also been making great strides to create a greener city, investing $60 million over the past decade to weatherize 23,660 low-income customer homes and 22 multi-family buildings in Philadelphia. An estimated 13% of home energy usage was saved by residents after their first year of weatherization. PGW is actively looking to incentivize greener behaviors, announcing new price reductions for smart thermostats on Earth Day.

Craig White, president & CEO of Philadelphia Gas Works, also explained to Invest: the organization’s commitment to sustainability, focusing on, “carbon recapture and keeping the environment clean and healthy.” However, White also mentioned cost as a variable at play, “Our financial future is very much tied to the city’s well-being, so we have to make smart decisions.”

Bill DiCroce, president & CEO of Vicinity Energy explained to Invest: a unique green initiative being pursued by the company that doesn’t entail additional costs, “This year, we’ve entered into contracts to eliminate use of heating oil in our facilities and replace it with locally sourced biofuels. The restaurants in greater Philadelphia dispose of 90 million gallons of vegetable oil annually, and now we have access to that recycled resource to fuel our systems. Instead of burning over a million gallons of petroleum, we’re swapping that for vegetable oil.” DiCroce went on to explain that there would be no change in cost for consumers, “In our plan, replacing heating oil with biofuels is at the same price point.”

In 2021, almost all energy companies are now striving to adopt greener technologies and initiatives due to factors like societal, political, and ethical pressure to achieve greater sustainability. Incentives are aligned, initiatives are being pursued, and the daunting task of achieving carbon neutrality is in motion in Pennsylvania.