Downtown Jacksonville is on the cusp of a major transformation

Downtown Jacksonville is on the cusp of a major transformation 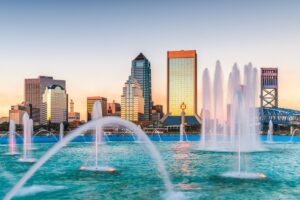 2 min read September 2021— As more people continue to relocate to Jacksonville, public and private investment in the city is becoming a crucial part of ensuring sustainable growth. As a result, Jacksonville’s downtown is in the midst of a construction boom expected to significantly transform sites along the St. Johns River.

Recently, Jacksonville City Council gathered for a discussion on the construction of a $400 million  shipyard site along the St. Johns River, a plan that also includes a Four Seasons Hotel and Residences as well as offices for the local football team, the Jacksonville Jaguars. Having already locked in the approval of the Downtown Investment Authority, council members are hopeful to see this project consolidate and transform this crucial part of the city’s downtown by 2025.

Shad Khan, owner of the Jacksonville Jaguars and a primary investor in the project, expects the development to bring attention to Jacksonville as a national destination for tourism and sporting events. “Shad is making a big bet on our future,”Jaguars President Mark Lamping told Fox News. “So, this is a big plan. Working together, we can make this happen.”

Another significant project in the pipeline is the relocation of The Museum of Science and History (MOSH). Initially, MOSH planned to renovate its 50-year-old facility, but they are now set to build a brand new location in Downtown Jacksonville as part of a bigger project to redevelop properties along the St. Johns River. Currently, negotiations are underway between the Museum and the Downtown Development Authority to construct a 129,000 square-foot museum on the northbank of the river.

A partnership between the New York-Based landscape architect SCAPE, Jacksonville Kasper architects + associates, and DLR group will be leading the charge of designing the new MOSH. “It was really their attention to creativity and detail,” MOSH’s CEO Bruce Fafard told the Jacksonville Business Journal. “It was clear to us that they had forged a very strong working relationship with their local partner. They were impressed during our on-site interactions with them. They were very engaged. They brought and presented three conceptual designs. They really knocked it out of the park.”

With the approval of Jacksonville’s City Council, Miami-based developer The Related Group has a green light to start constructing an eight-story, 327-unit multifamily building at the site of the former River City Brewing Company. The residential development is a response to the growing demographics of the city in the past year, and the increasing demand for residential units in downtown Jacksonville.

“This new development is well-positioned to benefit from Jacksonville’s explosion of growth that has only been heightened in the post-COVID age. With staggering in-migration numbers and strong job growth, the city needs top-tier, quality development in the urban core that will create a sense of place and drive traffic to area businesses,”said Cliff Taylor, a senior vice president with CBRE, in a press release.

Other projects expected to benefit downtown Jacksonville and the St. Johns River include the redevelopment of the Berkman II site and the One Riverside Avenue, as well as the construction of a park in the Landing.