Don’t call it a comeback: The return to office has been delayed

Don’t call it a comeback: The return to office has been delayed 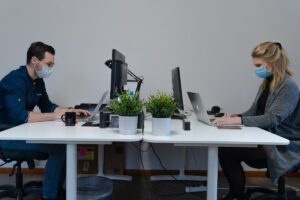 min read August 2021— The fabled return to the office looks to remain fabled a bit longer, as more companies are postponing and reassessing their return to office dates as cases surge from the COVID-19 Delta variant.

Wells Fargo & Co told its employees in a memo last Thursday that the company is looking to extend its work from home policy to Oct. 4th, an additional month from its originally scheduled return after Labor day on Sept. 7th. The bank is the second company to do so. The memo stated that the announcement would not impact employees who have voluntarily returned to the office already. The bank has approximately 7,000 employees in the city’s core, with a total 18,000 employees across the state of Minnesota.

Prior to the Wells Fargo announcement, Minneapolis-based U.S. Bank announced that it would be pushing out its return to sometime in 4Q21. A 30-day notice would be issued prior to any office return, but a specific date was not outlined. U.S. Bank has around 5,000 downtown employees, with 13,000 across the state.

The return to Downtown is further complicated by Target’s own decision to allow workers to work-from-home for the remainder of the year, in a report by the Star Tribune. The company told the paper that while offices would reopen Sept. 20, the opening would be limited only to common areas and to those who wished to return on their own.

Plans to reopen other floors and personal workspaces were put on hold amid concerns of having large groups of people in the building as Delta-variant cases continue to rise across the country. Masks and social distancing would also be mandated while at the office. Before the pandemic, Target had around 8,500 employees working in its Downtown offices.

But it’s not limited to the companies in Minnesota. Google and Microsoft both have postponed their returns to the office, and Amazon, with a tech office in the Minneapolis North Loop district, has also pushed back its plans to return to the office.

Dorsey & Whitney, one of the largest local law firms in the city by attorney count, is also pushing back its return to the office, and does not know when it will reopen its offices fully. In a statement to the Business Journal, the firm noted that, “Due to current pandemic conditions, Dorsey is postponing plans to return to its U.S. offices,” the statement read. “Every Dorsey U.S. office is now in an area of substantial or high COVID-19 transmission. The health and safety of our employees, clients and guests is our highest priority, so we will maintain the status quo in our U.S. offices.”

The complications surrounding plans to return to the office will no doubt continue as concern remains regarding the COVID-19 Delta variant and its increased rate of transmission even amongst vaccinated individuals, although break-through infections remain rare. The concern will likely continue to drive employees to reassess their work-life balance and relationships, leading to potentially further resignations and career changes in a year that has been marked by ‘the Great Resignation.’

Photo by Maxime on Unsplash