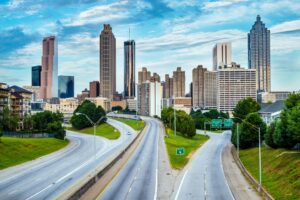 2 min read April 2021 ⁠— Atlantans want to see a greater effort on racial equity from banking and financial institutions, and several Atlanta-based companies are seeking to deliver just that. Some newcomers have made closing the racial financial gap their mission statement, while other established firms are incorporating new positions, boards and initiatives to keep up with the times.

A new face to the financial scene is Atlanta’s own Michael “Killer Mike” Render, member of music group Run the Jewels. He and co-founder Ryan Glover have big plans to shake up the industry status quo with their digital banking platform Greenwood. Named after the popularized Black Wall Street district in Tulsa, Oklahoma, the fintech startup encourages financial freedom, empowerment and closing the racial wealth gap. With $40 million in backing from companies like Bank of America, JPMorgan Chase, Truist, MasterCard and Wells Fargo, Greenwood is set on leveling the playing field.

“The net worth of a typical white family is nearly 10 times greater than that of a Black family and eight times greater than that of a Latino family. This wealth gap is a curable injustice that requires collaboration,” Glover said to TechCrunch. “The backing of six of the Top 7 banks and the two largest payment technology companies is a testament to the contemporary influence of the Black and Latino community. We now are even better positioned to deliver the world-class services our customers deserve.”

Bank of America itself, in addition to being an investor in Greenwood, announced its own racial justice initiatives on March 30. Expanding upon its $1 billion racial justice commitments in 2020, in the wake of George Floyd and the Black Lives Matter movement, Bank of America extended initiatives by another year and introduced $250 million to include support and advocacy for Asian-American communities and individuals.

“The urgency we feel to address long-standing issues of inclusion and racial inequality has only increased following the attacks and hate speech directed at Asian people over the last year,” said President and CEO Brian Moynihan in the Bank of America press release announcing the initiatives.

Furthermore, Ameris Bank, headquartered in Atlanta, named its first diversity and inclusion officer Karlene Gordon in August of 2020. Like other financial institutions, Ameris Bank has developed and increased its initiatives for the environment, social, racial and governance issues. Gordon spoke to the Atlanta Business Chronicle about breaking barriers and spearheading racial progress and change from within.

“Historically, in the banking industry, senior management and leadership roles have been predominantly held by white males. Networking within the banking industry is difficult to do from outside of that field,” said Gordon to the Atlanta Business Chronicle. “We must recognize that many of the required skills needed to be a successful banker overlap with other industries or can be learned, and that successful careers outside of banking can translate into successful careers within banking. Looking beyond traditional banking networks, work experience and our own personal networks will help our industry improve diversity.”