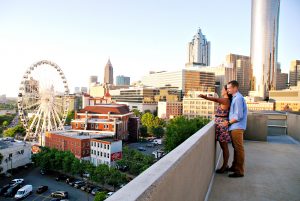 2 min read December 2019 — Downtowns throughout the nation are popular among millennials for their walkability and myriad retail, recreation and lifestyle choices. But as millennials settle down and begin to outgrow their trendy Downtown apartments, the need to find a suburban neighborhood that is affordable, yet vibrant and walkable, has solidified itself as a trend to watch out for in 2020. Aptly described as “hipsturbia,” millennials across the nation are trading their city lifestyle for the suburbs, without losing their affinity for walkability and access to cool, a-la mode restaurants, retail and recreation options. Developers are tapping into the hipsturbia trend as seen by the proliferation of affordable, multi-use suburban communities in cities like San Francisco, Chicago and Atlanta. As a result, in October, The Urban Land Institute named “hipsturbia” one of the top emerging trends for 2020.

In essence, “hipsturbia” suburbs are characterized by their vibrant downtowns that offer walkability, public transit and a variety of “hip” restaurants, retail and recreation. In the Atlanta Metro Area, Decatur, located In Dekalb County, is quickly embracing “hipsturbia.” Approximately one-third of Decatur residents could be considered millennials, according to the population figures on Decatur’s official website. This year, Niche.com, the neighborhood ranking and review site, rated Decatur as the No. 1 place, and suburb, to live in Georgia. Downtown Decatur offers a bevy of bars, restaurants, coffee shops, and parks, that add to its “cool” factor. The area has an urban-suburban feel that fits in with the “hipsturbia” trend. According to the Urban Land Institute, people living in communities like Decatur, are discovering that smaller communities can have the same appeal as big cities. The institute predicts that millennials will continue to move to communities that offer walkable spaces and “hip” amenities.

Once touted as cash-strapped and debt-ridden, millennials are making an impact in the national housing market. According to the institute, “hipsturbia” is happening in major cities like San Francisco and Chicago, as well as smaller cities such as Charleston and Phoenix. As the lack of home affordability draws young families away from big cities and into the suburbs, it is possible that it will not take long for “hipsturbia” to transform from a trend into the preferred suburban development style of the future.