Creating and maintaining a thriving business and innovation ecosystem

Creating and maintaining a thriving business and innovation ecosystem 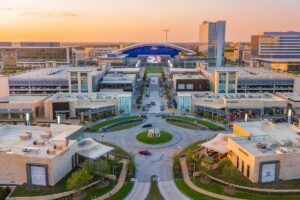 2 min read April 2022 — Through smart investment, forward-thinking programming and an emphasis on business development, the city of Frisco has positioned its economy for a robust future and continued transformation into an innovation hub.

“The population growth has been amazing. When I came to Frisco 25 years ago, there were 16,000 people. Now, we are near 220,000 in population,” Tony Felker, president and CEO of the Frisco Chamber of Commerce told Invest:. One of the primary keys to fostering Frisco as such an attractive ecosystem for living and business growth has been the thoughtful infrastructure and programming put in place to attract and sustain interest in the city.

“The Chamber has been heading several programs impacting the workforce and will continue to do so,” Felker told Invest:. One example of this is the Young Entrepreneurs Academy which encourages innovative thinking in the incoming generations of the workforce through simulated entrepreneurial programming. Students are able to act on their ideas and work from start to finish on programs and business models under the mentorship of seasoned industry professionals.

The Frisco Economic Development Corporation (FEDC) has specifically created a new position to maintain existing momentum and accommodate the unwavering relocations to the city through a Director of Innovation. Serial entrepreneur Jasmin Brand filled the role last month and will funnel continued economic activity into the city. The organization has dedicated an entire department to innovative strategies, fostering attractive environments for eSports, smart city technology, healthcare research and more.

Businesses, both new and tenured, have taken notice of the attractiveness of the city and have looked to capitalize on it. For instance, the Wing delivery service through Alphabet, Inc. chose Frisco as their test site. “Frisco will be the first city to deploy this delivery service within a city with over 100,000 residents,” Felker said. “They are partnering with Walgreens to deliver packages up to three pounds within a 10-mile radius.” He also discussed Uber’s decision to use Frisco to test their ridesharing model for Uber Air flights, taking advantage of the city’s proximity to DFW Airport.

CodeLaunch CEO Jason Taylor told the Frisco Economic Development Corporation that his decision to make Frisco his home base was also intentional. “Silicon Valley may be a good place to raise money, but North Texas is a much better place to spend it, building and growing the business,” he said. “It’s not only cheaper for the business in terms of taxes and cost of operations, but it’s cheaper for the employees and stakeholders in terms of cost of living and a very highly rated public school system.”

CEO of Careington International Corporation Barbara Fasola shared similar admiration for the city’s business environment as she explained her reasoning for headquartering in Frisco. “The City of Frisco promotes business, innovation, inclusion and diversity, which has helped make it possible for us to not only expand our business model, but also attract and retain a strong staff of tenured, experienced, and engaged employees,” she told the FEDC.

With a strong foundation in place, the city will look to continue its development as a hub for economic activity. “We were prepared for opportunities that might come in our direction, and we came together as a community to achieve things together that none of us could do alone,” Felker said. “We didn’t develop Frisco’s ‘secret sauce’ by accident – it comes down to partnerships, working together and doing the right thing for the city.”